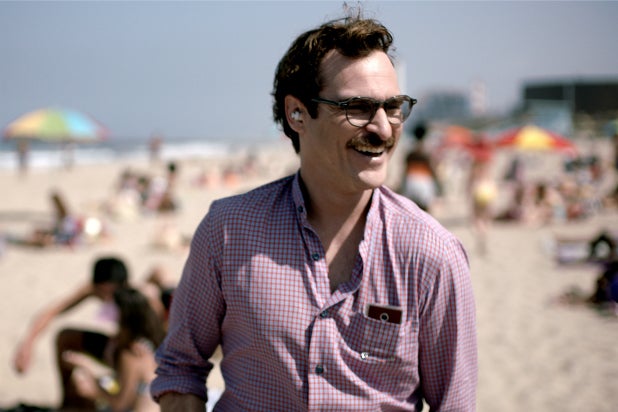 After falling in love with a movie character who has literally walked off the screen to be with her, Mia Farrow’s down-and-out waitress in “The Purple Rose of Cairo” sighs, “He’s fictional, but you can’t have everything.”

Substitute “virtual” for “fictional,” and you understand the dilemma of Theodore Twombly (played by Joaquin Phoenix), the sad-sack hero of “Her,” writer-director Spike Jonze’s bittersweet love story set in a Los Angeles of the near future. Like the best science fiction, “Her” imagines what the world might one day be like while at the same time telling us something about our own times.

If, like me, you’ve admired Jonze’s ambitions more than you’ve responded to his results, you may find that “Her” puts his means and his ends on more equal footing. He shoots for the moon and, this time, hits it.

Theodore is an absolute genius when it comes to understanding the emotions of others; as a prized employee of BeautifulHandwrittenLetters.com, he composes gorgeous, funny, heartfelt and heartbreaking missives for lovers, family members and other people with whom his clients have a soulful connection.

His own emotions, however, remain a mystery to Theodore; he’s been in a serious funk since breaking up with his wife Catherine (Rooney Mara), to the point where his old college pal Amy (Amy Adams) invites him for a night out with friends but specifies that she’s asking the “old, fun” Theodore to come.

It takes a new relationship to bring Theodore back to life, only in this case, it’s with an artificially-intelligent computer operating system who names herself Samantha (voiced by Scarlett Johansson). Samantha has the curiosity about the world and the joy over quotidian details that have been missing for so long in Theodore’s life, and soon they’re having a virtual relationship, complete with the sort of sex that’s not unlike the kind long-distance lovers have over the phone.

Part of what’s so brilliant about “Her” is that Jonze never bothers to make the plot about keeping the relationship a secret; we learn that there are magazine trend pieces about human/OS couples, so it’s not like Theodore has to sneak around like the protagonist of a 1960s sitcom. “Her” explores the dynamics of relationships in a fascinating way, forcing us to ask questions about why we fall for others and whether or not what we’re really falling for are the constructs we make of our partners.

(As Amy points out, the very act of falling in love is “socially acceptable insanity.”)

Jonze’s script is intuitive and intelligent about the human heart (and reasonable facsimiles thereof) and about the patterns of behavior that people can often repeat time after time; rebound love affairs, the film seems to argue, can be the equivalent of Karl Marx’s famous line about history repeating itself, first as tragedy and then as farce.

Phoenix adds to his extraordinary gallery of damaged heroes, but this may be the most sweet-natured character he’s played yet. He exposes all of Theodore’s vulnerabilities and anxieties, but he also gives us a glimpse of why any woman, human or otherwise, would fall in love with him in the first place.

With just her voice, Johansson conveys a breadth of emotion; we know when Samantha is swoony and when she’s crushed. (Although admittedly, until the closing credits, I was convinced I was hearing Rashida Jones. Go figure.)

“Her” is stunning looking, offering a vision of the future that’s bright and shiny and filled with skyscrapers, with glimpses of heavy industry at the perimeters. People don’t run around swathed in spandex (although the waistlines of men’s slacks will apparently be getting higher), and overall the movie provides a ten-minutes-from-now that feels plausible and lived-in.

This is a date movie that will prompt both tighter hugs and longer conversations between lovers, and it represents a new level for a filmmaker already known for working without a net. Even if you don’t love “Her,” you certainly won’t easily dismiss “Her,” either.