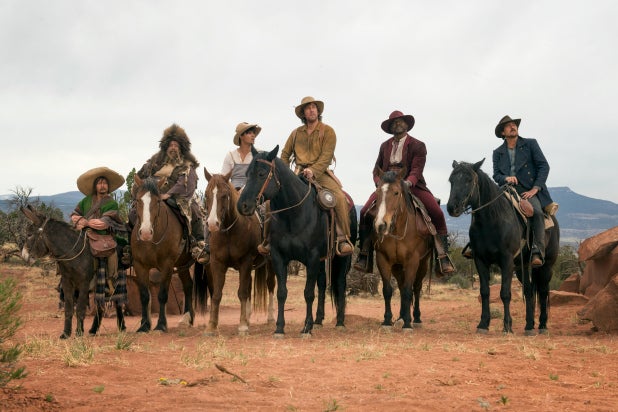 If the universe holds any mercy in it at all, that is.

Netflix doesn’t really have anything to lose by distributing Adam Sandler‘s satirical Western comedy, which came under fire by Native American actors on set during filming. The film is a mere blip in the streaming giant’s roster of entertainment properties, including sublime original series, television network favorites and film classics.

Everyone else involved, however, probably felt a small part of their souls die after viewing the final cut, which clocks in at about 2 hours too long.

Sandler plays White Knife, the bastard offspring of ne’er-do-well career criminal Frank Stockburn (Nick Nolte), who abandoned his son as a child. Orphaned when his mother was shot down, White Knife was raised by an Apache tribe and grew to be a master of knives and — mystical stuff. When his father is kidnapped, White Knife sets out to find his siblings by his deadbeat dad and secure the man’s release. After discovering his five half-brothers — all uniquely quirky “comedy” stereotypes — the group forms a half-baked posse and intend to rob from the criminal element to raise money to get their father returned.

Back in April during filming, a number of actors, primarily from the Navajo Nation, left the set because they felt the film, a satirical take on Westerns like “The Magificent Seven,” grossly misrepresented the Apache culture it depicts, particularly women and elders of the tribe.

Female characters named “Beaver’s Breath” and “No Bra” and a scene involving a woman squatting and peeing while smoking a peace pipe were cited as particularly offensive.

Of the marginalized females, Julia Jones takes the most prominent role as White Knife’s love interest Smoking Fox. Whitney Cummings appears as Susannah. Many of the other female roles have inspiring descriptions like “Sexy Bar Girl,” “School Marm,” “Soiled Dove Saloon Girl” and, of course, “Prostitute.”

All of which underscores that the film’s main offense is that it was conceived at all.

“The Ridiculous 6” traces its heritage to classics in the sub-genre like “Blazing Saddles” and “¡Three Amigos!” but delivers none of the laughs of those two comedy favorites. In fact, to mention it in the company of those two films is a terrible disservice to them. (Apologies.)

A campfire sing-along proves a silly highlight of the film. The realization that it is the only highlight can spark a bit of outrage — so much time and money spent on an effort that reeks more of a fraternal prank than comic artistry. A stinking, steaming pile of donkey diarrhea — which is, naturally, a recurring joke in the film.

That Vanilla Ice – here playing a rap-poser Mark Twain and delivering lines like “Oh, snap, you got the drop on Wyatt Earp?” — is the comic relief in your comedy should be a clue that your shit is tired.

“The Ridiculous 6” is everything wrong with Hollywood for the past two decades: a circle-jerk of imbecilic white-dude humor. That the coterie of guys responsible for “Click,” “Blended,” “The Waterboy” and their like continue making these films is a travesty.

Fortunately, it serves the purpose of being example A of why the Hollywood machine needs more diverse voices greenlighting, writing and producing content, as well as acting in and directing it.

Adam Sandler needs an intervention: Someone remind him of the great work he did in “Punch Drunk Love” and “Funny People.” But then the fact that fans still spend money buying tickets to see — or, in this case, Netflix-and-chill with — Sandler’s self-produced tripe just keeps encouraging him to do the wrong thing.