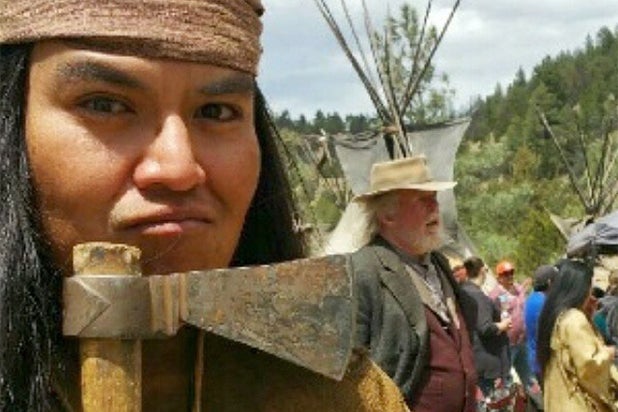 A dozen or so Native American actors walked off the set of Netflix’s “The Ridiculous Six” movie starring Adam Sandler, according to media reports.

ICTMN reports that the actors, primarily from the Navajo Nation, left the set because they felt the film — described as a satirical take on Westerns like “The Magificent Seven” — grossly misrepresented the Apache culture it depicts, particularly with regard to women and elders of the tribe.

The report cites such examples from the script as characters named “Beaver’s Breath” and “No Bra,” and a scene involving a woman squatting and peeing while smoking a peace pipe.

“I was asked a long time ago to do some work on this and I wasn’t down for it,” actor Loren Anthony, one of those who walked, told ICTMN. “Then they told me it was going to be a comedy, but it would not be racist. So I agreed to it, but on Monday things started getting weird on the set.”

Allison Young, another actress who walked off the set, concurred and added the group’s issues were not taken seriously by the filmmakers.

“We talked to the producers about our concerns,” she said. “They just told us, ‘If you guys are so sensitive, you should leave.’ I was just standing there and got emotional and teary-eyed. I didn’t want to cry, but the feeling just came over me. This is supposed to be a comedy that makes you laugh. A film like this should not make someone feel this way.”

For its part, Netflix is standing by its product and the humor in the film.

“The movie has ridiculous in the title for a reason: because it is ridiculous,” the streaming giant said in a statement. “It is a broad satire of Western movies and the stereotypes they popularized, featuring a diverse cast that is not only part of — but in on — the joke.”