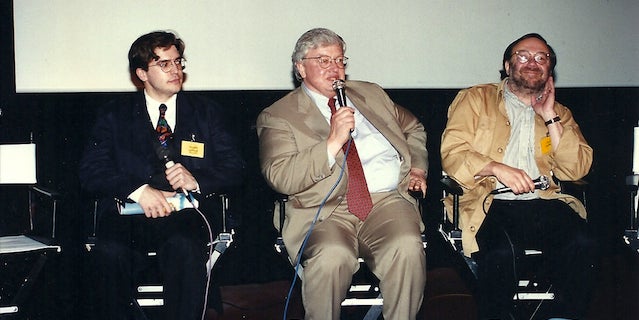 I don’t remember the first time I watched Roger Ebert and Gene Siskel review movies on their groundbreaking PBS series “Sneak Previews,” but I must have been an early fan. Upon hearing Thursday’s news of Ebert’s untimely death at age 70 from cancer, a family friend reminded me on Facebook that in 1975, the year the show went on the air, I told her that when I grew up, I wanted to review movies just like Siskel and Ebert.

It’s no exaggeration, then, to say that Roger Ebert‘s work has colored my entire life. Say what you will about Ebert and Siskel watering down the art of film criticism for a mass audience, or reducing opinions to the “thumbs up/thumbs down” binary, he took a rarefied profession and put it in front of me as a child, letting me know that watching movies and telling people what you thought about them was actually a job that one might pursue as an adult.

I watched the show, I read his books, I followed his passionate recommendations – 15-year-old me made it a point to see “My Dinner with Andre” after Siskel and Ebert praised it to the skies, a rave review that actually rescued the movie from obscurity – and I just as frequently disagreed with his opinions. But even disagreeing with Ebert was entertaining, because he never wrote from a monolithic point of view. He always let you know which buttons he possessed and why a particular film pushed them.

Ebert’s passing would be sad enough for me strictly as someone who admired his work and viewed him as a role model. But I was also lucky enough to meet him in 1995, my first year as Artistic Director of the USA Film Festival/Dallas, when he came to help us celebrate the 25th anniversary of a festival he helped to create; in the festival’s earliest iterations, a panel of critics (including Ebert and future director Paul Schrader) would select and present the films.

Ebert (amicable as he was, I never felt comfortable calling him “Roger”) and his energetic wife Chaz couldn’t have been lovelier guests. And for a terrified 27-year-old programming his first film festival, the Eberts couldn’t have been more supportive, praising the selections, offering advice and generally helping to make the event both smooth and entertaining. (He even let me ask him questions about “Beyond the Valley of the Dolls,” the notorious screenplay he co-wrote with Russ Meyer.)

It was always a treat to see them at other festivals in other parts of the world – Chaz stopped me for a hug at the recent Independent Spirit Awards – and I admired their unflagging enthusiasm for film, tooting the horn for established moviemakers and newcomers with equal vigor. (They became underwriters for the Spirits’ Truer than Fiction Award, which offers both cash and recognition to a talented documentarian just starting out.)

While the internet rocked the world of traditional media, Ebert was an early and avid blogger, establishing a strong and exceedingly interactive online presence. And when cancer robbed him of his ability to speak, it was on his own website that he maintained the conversation, always provocative, never self-pitying. Earlier this week, he announced that a recurrence of his cancer would lead him to take a “leave of presence,” but he still brimmed over with new projects and new reviews to be written.

Whether he knew it or not, Roger Ebert was there for me at several key moments in my life. He inspired me by living the life he led and by facing illness and mortality with dignity and grace. I’m going to miss him, and so will everybody else who loves movies and enjoys engaging in the cultural conversation about them.