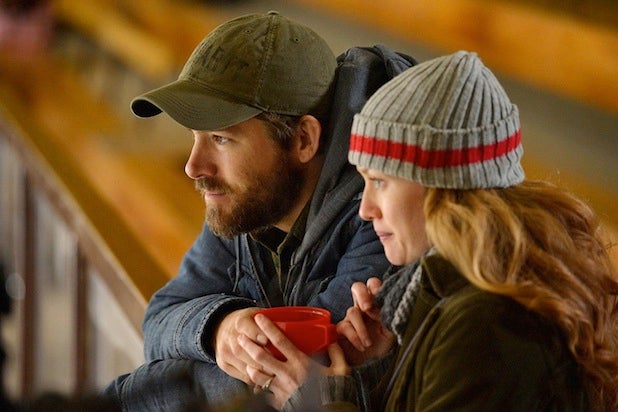 At a festival notable for a handful of films that have been widely derided, “Grace of Monaco” and “That Lovely Girl” foremost among them, Atom Egoyan‘s “The Captive” may now hold a real distinction: It could be the first of this year’s Cannes films to be greeted with outright boos.

The abuse wasn’t unanimous at the Friday morning press screening of the overheated child-abduction thriller, but the boos were at least as loud as the applause for a film that at its best will be divisive.

Superficially reminiscent of fellow Canadian Denis Villeneuve‘s 2013 drama “Prisoners” in the way it deals with an abduction (in the snowy North) that puts the father at odds with the police, “The Captive” has none of that film’s slow-burn intensity; it’s faster, it’s more jarring and in the end it’s pretty ludicrous.

Ryan Reynolds tries gamely as an anguished father whose daughter has been missing for eight years, ever since he left her in the car while stopping to buy a pie after skating practice, but the dynamic between Reynolds and Scott Speedman as a suspicious detective is essentially one-note, with Speedman trying to provoke Reynolds into a slip and Reynolds getting madder and madder as he tries to figure things out on his own.

Viewers have to do a fair amount of figuring out, too, because Egoyan has opted to tell the story in a scattershot, non-chronological manner that makes the film a little more provocative but no more persuasive.

But the problem isn’t the way in which Egoyan tells his story — it’s the story he’s telling: The overwrought and illogical concoction posits a seemingly vast, internet-based conspiracy of child abductors with unlimited resources to imprison young girls for years shares the results on websites so tightly encrypted that the cops don’t have a prayer of catching on, and wires hotels with hidden cameras for the sole purpose of tormenting one victim’s mother.

Oh, and the conspiracy also seems to include construction foremen and guys who can steal a truckload of trees from outside a motel room without the occupant noticing.

The more you learn, the less sense it makes — but Reynolds rages, the creepy villain glowers when he’s not listening to Mozart, and Egoyan whips it up into a ludicrous frenzy that is nonetheless attractively composed and occasionally unsettling.

As Speedman’s anguished wife, Mirielle Enos at least gets to convincingly veer from anguish to anger.

A24 announced that it had purchased U.S. distribution rights to the film around the time that the morning screening was beginning, and maybe Reynolds fans will turn out in big enough numbers to make it worth their money. But those who remember Egoyan from the Oscar-nominated “The Sweet Hereafter” or the previous Cannes entry “Exotica” aren’t likely to embrace this potboiler.

And at a festival at which Mike Leigh‘s “Mr. Turner” stands out as the only true critical success of the first few days, “The Captive” is yet another misfire.