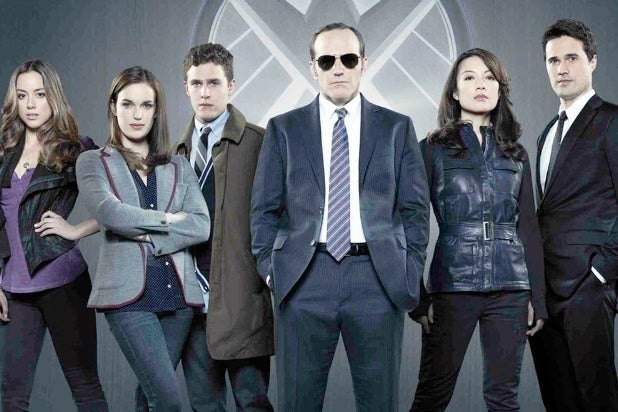 Say this for us puny humans: We tend to be funnier that Thunder Gods, super soldiers, and even Hulks.

ABC’s Marvel Comics spinoff “Agents of S.H.I.E.L.D.” may face longer odds than the Avengers did in the Battle of New York. The Avengers just had to save a city from otherworldly invaders. “S.H.I.E.L.D” has to revive a fourth-place network that rests most of its hope in female-facing one-word dramas like “Scandal,” “Revenge” and “Betrayal.”

The members of the team that assembled the mighty Avengers have no super powers of their own. They’re like the Avengers if everyone had only the powers of Hawkeye and The Black Widow: the ability to fight, look good in a sleek costume, and shoot stuff sometimes.

Luckily, the “S.H.I.E.L.D.” crew know playing second banana to Earth’s Mightiest Heroes. So they try to get by on their jokes, and often succeed. The credit goes to the family writing their lines.

After Tuesday’s episode, Joss Whedon will only executive produce. He has another “Avengers” to make, after all. But the show’s wit probably won’t leave with him. It so happens that the husband-and-wife team who will run the show also dreamed up the wittiest thing that happens in the pilot. (It involves an injection.)

Something else the “Avengers” have that “S.H.I.E.L.D.” doesn’t: Big stars. Clark Gregg is back, and utterly charming, as Phil Coulson, the agent supposedly killed in “The Avengers.” Colby Smulders visits from “Avengers” as well, to provide some background, though not, of course, about why Coulson is still alive.

The rest of the S.H.I.E.L.D. agents and other assembled derring-doers have fairly fresh faces. The most familiar belongs to Ming-Na Wen, playing resident badass Melinda May. It takes a single thrilling fight sequence to establish her as the agent most likely to separate a baddie’s feet from the ground.

Brett Dalton, as Agent Grant Ward, feels a little generic at first, but starts to win us over with that injection scene. Iain de Caestecker and Elizabeth Henstridge are hamstrung with a Samneric-type connection — they’re collectively known as FitzSimmons, but by the end of the pilot, that name is the most memorable thing about them.

It’s not their fault: The pilot is crowded. The new person who stands out the most is Chloe Bennet (that’s somehow the name of an actual actress, not a TV character). She plays Skye, who doesn’t trust “S.H.I.E.L.D.” She has a bit of an Aubrey Plaza-not-sure-if-I’m-cool-with-this vibe, and it adds to the show’s amused distance from its source material. She seems to be the audience surrogate in a world of people who, in a superhero movie, might all be audience surrogates.