The first few minutes of the “Severance” Season 1 finale provided a shock to viewers, as fans learned that Helly R. – the rebellious new Lumon employee constantly fighting back against the system – is actually the innie version of Helena Eagan, granddaughter of Lumon founder Kier Eagan and Company Woman to the core.

The episode found Helly (Britt Lower), Mark (Adam Scott) and Irving (John Turturro) doing reconnaissance in their outie’s lives for the first time, and Helly struggled to keep it together as she awoke inside Helena’s body at a Lumon celebratory function at which she was meant to give a speech.

“I think the beautiful thing about this character is she embodies this idea that we are often our own worst enemy,” actress Britt Lower told TheWrap about the Helena reveal during a recent interview. “This show is an experiment in truly compartmentalizing parts of our lives that we don’t want to face.” 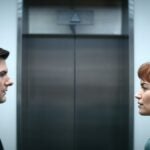 Also Read:
‘Severance’ Creator Dan Erickson on Those Finale Twists and the ‘Cultism’ of Lumon

Lower went on to discuss how she approached this dichotomy in her performance in the finale episode and revealed when exactly she learned the truth about Helly’s outie. During the interview, Lower also talked about that tense scene with Helena’s father, the claustrophobic nature of the show’s sets, that dance party, and why she and Scott channeled their inner teenagers for Helly and Mark’s romantic tension.

Read our full Q&A below.

When did you find out about Helly’s outie life?

Britt Lower: It was certainly not revealed to me during the audition. I think it was pretty shortly after it, they knew early on in the process. And then the extent to which the details surrounding Helen Egan were parsed out during the pandemic when we had a six-to-seven-month break, when we were supposed to have started in March. And the details of her backstory were worked on during the pandemic.

How did you approach those finale scenes where you’re waking up and she’s discovering, “Oh, I’m the bad guy,” essentially?

Well, I think the beautiful thing about this character is she embodies this idea that we are often our own worst enemy. And this show is an experiment in truly compartmentalizing parts of our lives that we don’t want to face, whether that’s work or grief. And in Helena’s case, it’s a sort of flip where it’s like, this is a part of myself I don’t want to look at. In that final episode, I mean, for sure she doesn’t want to look at it. I am my own worst enemy is… It hits me even when I’m saying it. They say we don’t speak to our best friends the way the voice in our head speaks to ourselves. And when she confronts her outie for the first time with the video earlier in the season, the way that outie Helena is speaking to Helly is so cruel. And the way I justify that is we do in our own heads speak to ourselves so unkindly.

How I approached that final episode, I mean, to be honest, I think there were 46 images of me in that room and they are 16 feet tall. They’re giant photos of me. Ben and I were joking, it’s either an actor’s fantasy or worst nightmare. And for me, it was a little bit of both. When I first saw them, when we were rehearsing the scenes, I kind of fell to my knees. I felt a little nauseous. There’s something about seeing one’s self reflected back to you on that scale, that I just used that visceral sensation for Helly too. I mean, it’s so disorienting.

It really all kind of coalesces in this bathroom scene. And I wanted to ask about the experience of shooting that. Kind of confronting Helena’s relationship to her father, which you get some strange vibes from. What was the experience like of doing that?

That was a challenging scene to film because Helly is trying to convince her father that she’s herself, and having no clue what their dynamic is on the outside, we were really toeing the line between, is she being a good actor in this moment? How much can she reveal her true feelings to him? Which is like, I hate this company. And I think she’s also navigating, is this someone I can trust? Can I tell him what’s going on down there or is he the reason? I think it was a really just delicate balance.

And then it very quickly becomes like, oh, probably can’t trust this guy.

Yeah. And it’s played so beautifully and creepy. 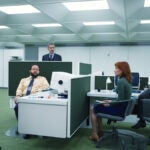 Are you guys told more of the backstory of Kier Egan and kind of this company and stuff, or are you guys kind of playing to the scripts as written?

I chose to be a little more in the dark about it. Particularly because most of my point of view is from innie Helly’s. And to kind of be in a constant state of “what the f— is going on?” was kind of to my benefit.

Her arc throughout the season is heartbreaking because there are also moments where you think, “Oh, maybe she’s getting more accustomed to it and she’s OK.” And then there’s that harrowing moment of self-harm, it’s just really rough. And I imagine that was delicate and challenging material for you as a performer to really toe this line throughout the season.

Yeah. I mean her progression towards self-harm is something that we dealt with very delicately and sensitively. And I think it really speaks to the depths to which she feels betrayed and betrayed by herself. And that act, the suicide attempt in some ways is an act of revenge against someone who she doesn’t feel like is actually herself. So that was, again, a very intricate balance of how to play it. Because it’s like an act of retaliation.

She’s so strong-willed, and one of the sequences that’s the most harrowing I think is the break room, where it feels like she may finally get broken a bit. What was the experience like shooting that?

There was a projector screen with a light flashing, and we had to take breaks for my eyes because the light was shining the text into my eyes. So it was physically hard to see. And Tramell [Tillman] just did such a beautiful job of grounding that scene and the set design and every aspect of that room is so detailed. And, again, Helly is constantly looking for a way out and doing recon in every new room she’s in. She’s trying to figure out what’s happening and how to get out, what’s going on here. She’s very strategic. So even in that break room where she’s being broken, the thought process for me was let me get through this so then I can get out.

The production design is incredible floor to ceiling. Was that helpful for you guys as performers to feel like you were rats in a maze a little bit?

Yeah. I mean, we filmed for like 11 months in a windowless, fluorescent-lit office. It was at times maddening, and we did get lost going to set because the building itself had some sort of like maze-like hallways to get to the set. And the true relief was actually the moments when we got to take off our masks and shields and act with each other and feel the warmth of humanity with one another. Whereas the rest of the set and the environment was so sterile on purpose.

I imagine another moment of relief was the music dance experience.

Oh my gosh. Oh, that was my favorite day. Tramell Tillman is the best dancer on the planet.

John Turturro is the next best dancer, but he had actually toned down his dancing a little bit because he was too good, and Irving would not be as good of a dancer as John Turturro. But yeah, we definitely kept the dancing going off set, in the hair and makeup room.

The Helly and Mark relationship is really sweet and touching and challenging. What was that experience like of building out that relationship with Adam?

Adam is so generous creatively, so it was a pleasure to discover what their dynamic is. The characters are both on their growth edge too. In that music dance experience when we’re clocking each other from the other side of the office, we discovered that they’re kind of like teenagers in that moment. They haven’t actually, in the world that they’re in, they haven’t experienced any kind of crush or sexual tension. And we kind of joked that it was during the music dance experience that they went through puberty.

Yeah. And maybe Helly’s a little bit more like a freshman in high school. She has that, I really tapped into a lot of teenage angst energy with her. I was a good kid growing up and like never broke the rules, so it was super satisfying to be in her shoes and just being like, f— the authority. 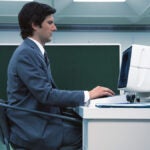 It’s great too, because immediately she’s like, get me out of here, but she doesn’t submit. She is unrelenting. Everyone else is like, give yourself over to it. Which makes the finale reveal all the more shocking, that her outie is this authority figure that is controlling and keeping her down, which is just heartbreaking. The most rebellious person on the inside is the bad guy essentially on the outside.

Absolutely. And I think I did a lot of I nature versus nurture when I was thinking of the characters. And in a way, it makes sense to me that someone who was indoctrinated into this system — which is quite cult-like at the end of the day — would internally have unexpressed feelings of rebellion towards that same system. Maybe one of the reasons why she is so defiant is because she grew up with this system of rules as religion.

What was the experience like working with Ben as a director? Especially in the finale, the camera is kind of swirling around the characters. There are these long takes that aren’t big extravagant wonders, but they kind of keep you in the moments as we’re experiencing the moments.

I love working with Ben. He’s so meticulous and detail-oriented and he really understands each of the departments and respects the work that everyone brings to the table. And because he’s so rigorous, everyone shows up with their A-game. So you just know you’re in good hands. He has great taste. He has great taste in music and office supplies. And he just really cares about the work and it’s a pleasure to be on a set with him.

All episodes of “Severance” Season 1 are now streaming on Apple TV+.