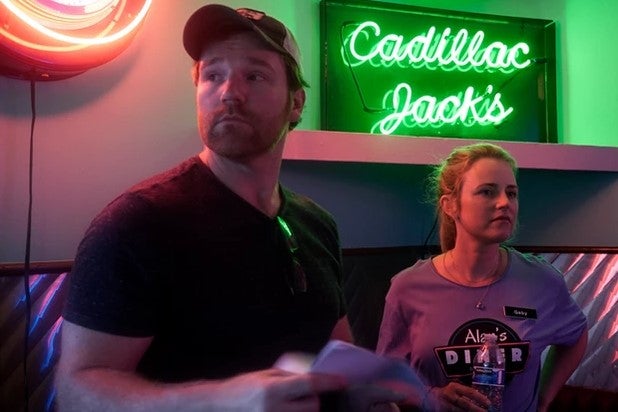 Read these first words out loud. Pretty simple, right? Not for everyone.

The simple act of speaking is something most people take for granted. Similar to breathing, it’s a motor function that most people never once think too deeply about or how it’s working. Not for people with Spasmodic Dysphonia. Spasmodic Dysphonia, aka “SD,” is a neurological condition that I’m sure most of you have never even heard of. That makes sense because it only affects roughly 50,000 people in the United States. Chances are you don’t even know anyone with it, until now.

Nice to meet you, my name is Shane Hartline. I’m an actor, filmmaker and comedian living in Los Angeles and I have been living with a mild case of Spasmodic Dysphonia since I was 5 years old. If you know me, I always have to emphasize “mild” because people that suffer from this condition truly suffer. Spasmodic Dysphonia affects a person’s ability to speak, causing breathiness, breaks, spasms, etc. It affects each person differently and worst of all, there’s no cure — only a temporary treatment of injecting Botox directly into the vocal cords. Yeah, that was never for me. Now, let’s backtrack a little bit …

At a very young age, I knew that I wanted to be an actor/filmmaker. I picked up my very first video camera at the age of 10 and haven’t put it down since. Not the same one obviously, VHS cameras aren’t really the thing anymore.  Then I started making my own little videos with my friends, family, whomever. Anyone that came to visit my house was subjected to watching these “works of art.” I loved watching people’s reactions and I still get no greater joy. Being born in Central Florida and before the internet was a big thing, I had no idea how to break into the entertainment business. I used to go as far as picking up the phone and calling Universal Studios asking, “How do I get on the Nickelodeon shows?”

When I first got Spasmodic Dysphonia at the very rare age of five, my family and I didn’t even think anything of it. Kids at that age are oblivious and mostly kind. It wasn’t until many years later, when bullying kicked in, that we went to a speech doctor to get diagnosed. Being a red-headed kid, who was overweight, with freckles and a funny voice, I was the total package for being bullied. That’s why I really did as much as I could to bring my performances into the classroom, and turn the “laughing at me” to “laughing with me.” Many comedians have similar stories. What’s interesting about my case of SD is that when I change the pitch of my voice, most of the time it goes away entirely. So I found making funny voices was an easy way for me to do speeches in front of class, which was terrifying to me. Many teachers got impersonated back in the day (Sorry, Mrs. B).

In acting, your voice IS your tool. Many people with a condition that limits their ability to speak freely don’t choose an acting career. That thought never came into my mind. After high school, I dove headfirst into entertainment. I got involved in pro wrestling and wrestled independently around Florida as the blond surfer “Rip Malibu.” I was able to change my voice and I looked at wrestling as a way for me to start acting. Around the same time, YouTube made its debut. I began posting silly videos, like I had been doing for years, to my YouTube channel. This snowballed into me getting my first agent, booking some commercials, etc. YouTube was a way to make the videos I want, say things the way I wanted and control my narrative.

In June of 2011, that little “acting hobby” became very real. I booked a life-changing role in the film “Rock of Ages,” which was shooting in Miami. I played Jimmy the Bartender alongside stars such as Tom Cruise, Alec Baldwin and Russell Brand. My confidence was through the roof. Someone who was told he could never do it, did it.

Soon thereafter is when the mental rollercoaster kicked in. I was on a set of another project only a month after that, confidence still through the roof, when things changed. The director — who couldn’t have been a nicer guy — asked me to say a line in an exact certain way that he wanted. At the time, I didn’t have the confidence I do now to say, “Sorry, I have a neurological condition that affects my speech so that pitch on that word is very difficult for me.”

Instead, I used my usual excuse at the time, “Sorry, I’m sick.” He gave part of my line to someone else. My job was affected by my condition. After that, while I was still able to book jobs, the mindf–k really took control of me. A constant spiraling of different self-produced scenarios: “What if I get to set and they fire me because I can’t say something a certain way?” or “I’ll never be able to book X job because of my stupid voice.”

A condition that already in some ways strangles my voice was now strangling my mind.  Stress only makes this condition worse, so spiraling like that made it pretty bad at times. While I was still able to continue a career as an actor, it became one of my biggest internal roadblocks. This was all happening to me, and outside those in my immediate circle, nobody knew. Now let me again state, I have a very mild case. I don’t suffer like the people with severe cases do. But all I know is, at my worst times with this condition, I was suffering. So my heart breaks at what it must be like to live with a severe case.

In January 2019, while on a long road trip and listening to the Duplass Brothers’ audiobook, it hit me like a brick. I needed to start really letting this go. I needed to tell my story. I recognize that I have a very privileged life. So I knew that if I tried to tell any story that made it come across like, “Oh man, I’m Shane, my life is so hard,” it would not be received well. Nor did I want to do that because I don’t believe that. But I know I’ve had struggles many people have. And like EVERYONE, I have a story.

I began working on “Cookie,” the story of a woman with a severe case of Spasmodic Dysphonia that took away her dream of being an actor. I wanted it to be a little bit of my story and a little bit of everyone’s with the condition. I wanted the viewer to really feel what we all feel with SD. Having made films for years with almost no budget, I planned on making this short for around $2,000.

Before doing that, I needed the blessing of the SD community.  The condition has never been represented on film.  The only thing close was in “Us” — Lupita Nyongo’s haunting voice was inspired by someone with SD — which didn’t get a great response from the SD community. I’ll never forget the night I posted on a Facebook group what I wanted to do with “Cookie.” I wanted to share our story; I wanted to raise awareness like never before. The outpouring of support was like nothing I’ve ever experienced.  People wanted to help; people wanted to become a part of this.

I decided to do a Kickstarter because I knew if people wanted to be involved, I could potentially make this better than I ever had dreamed of.  Together, we all raised $50,000 and made “Cookie” in the summer of 2019.  I knew what I was doing with “Cookie” was bigger than me and we’ve only hit the tip of the iceberg when it comes to the potential awareness it could raise.

“Cookie” was the first time I ever went public about my condition. I never wanted to, but I needed to. I was afraid I would never work again if people in the business found out about it. That is so dumb because it is what makes me me. I’m so grateful for “Cookie” and what it’s done already for people with SD and for me.

I’m not at the place of fully accepting it but I’m a hell of a lot further than where I was. I want my story to inspire those with SD or similar conditions to still go after your dream of acting, singing or whatever. Don’t let it strangle you. I want my story to encourage people in the entertainment business to be more inclusive with people’s vocal conditions. Because much like colors of skin, we all have different colors of voice and they should all be represented.

BIO Shane Hartline
Shane Hartline is an American actor, writer and comedian. His acting credits include "Rock of Ages," the Disney Channel Series "Stuck in the Middle," "Jimmy Kimmel Live!," "Graceland" and "The Inbetweeners." A skilled sketch comedy actor, Shane's online sketches and videos have gone viral, receiving 3.6 million likes on TikTok and millions of views on Instagram.

Shane Hartline is an American actor, writer and comedian. His acting credits include "Rock of Ages," the Disney Channel Series "Stuck in the Middle," "Jimmy Kimmel Live!," "Graceland" and "The Inbetweeners." A skilled sketch comedy actor, Shane's online sketches and videos have gone viral, receiving 3.6 million likes on TikTok and millions of views on Instagram.