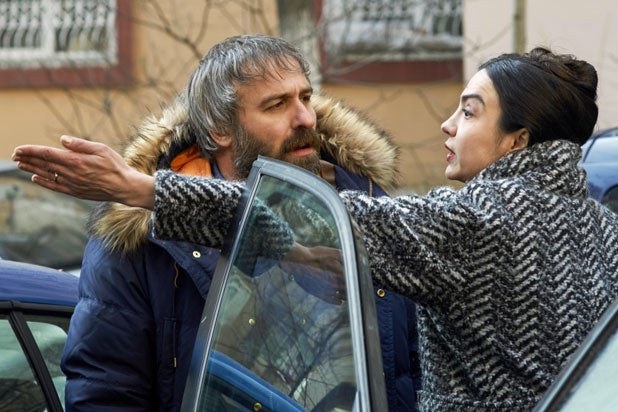 Since the Cannes Film Festival lineup was announced in mid April, speculation has swirled around what appears to be a wide-open race for the prestigious Palme d’Or award. Sight unseen, one of the presumed top contenders has been Romanian director Cristi Puiu’s family drama “Sieranevada,” which was also the first competition film to screen for the press at this year’s festival.

And based on a Wednesday night screening, I’ll say this: “Sieranevada” might have a chance if jury president George Miller and his fellow panelists are in a very dark, very patient mood.

Two hours and 53 minutes long, with most of its running time taking place in a small, claustrophobic house crowded by family members attending a memorial service, the film is bold and far-reaching, but agonizingly slow; it bears certain similarities to the long and talky 2014 Palme winner “Winter Sleep,” though Puiu’s work is deliberately harsh and uncomfortable, with little of the lyricism of Nuri Bilge Ceylan’s Turkish drama.

A member of the lauded Romanian new wave of filmmakers that also produced Cristian Mungiu, in the Cannes competition this year with “Bacalaureat,” Puiu is best known for “The Death of Mr. Lazarescu,” which won the top award in Cannes’ Un Certain Regard section in 2005.

“Sieranevada” focuses on a troubled middle-aged man attending a family memorial; while it is set three days after the Charlie Hebdo attacks in Paris, its biggest nod to terrorism comes in the form of a character who constantly talks about 9/11 conspiracies and general mistrust of the government.

But then, few people can be trusted in Puiu’s film. The movie takes its time going from room to room and conversation to conversation, uncovering squabbling couples, fighting generations, cheating spouses and even a “vomiting junkie,” as one character calls a young woman who spends most of her time passed out.

And when it steps outside the confines of the house, it’s clear that things are no more hospitable in society at large. The house is full of human wreckage, people whose only refuge is gallows humor, but Puiu is after bigger game than one damaged family. The urban landscape outside is as bleak and inhospitable as the emotional terrain within.

“Sieranevada” is a monumental portrait of a family and a society ripped apart by the mistrust that comes from a violent and perilous history, clinging to memories that create rifts instead of healing them. It’s not an easy sit: Shot dispassionately in long takes that linger over the damage, it’s likely too slow and forbidding for any sort of U.S. release outside rarefied art houses, even if it clearly shares some DNA with Romanian gems like Mungiu’s “4 Months, 3 Weeks and 2 Days” and Corneliu Porumboiu’s “Police, Adjective.”

A potential Palme d’Or winner? It’s not an obvious pick, to be sure, with 20 more contenders still to be unveiled. But the competition has begun with a slow, hard punch to the gut.