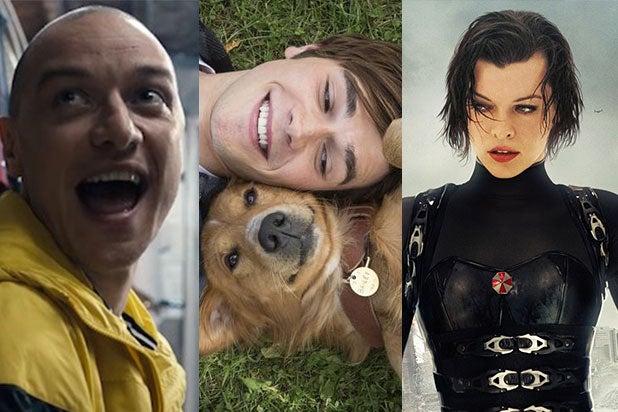 M. Night Shyamalan‘s “Split” is still going strong in its second weekend at the box office: The Universal/Blumhouse release starring James McAvoy earned $7.9 million on Friday night and is expected to take $25.7 million over the three days.

Tracking for “A Dog’s Purpose” had been all over the map going into the weekend, with analysts putting the film in an opening range of $13 million to $21 million, with the studio looking at a gross in the high-teens to $20 million.

Last week, TMZ leaked a video from the set of “A Dog’s Purpose,” in which it looks like a German shepherd in the film was being forced into a pool of rough water. A later section of the video shows the dog going underwater for about four seconds. The video sparked outrage all over the nation, with many, including PETA, calling for the boycott of the film.

Universal canceled the premiere and the film’s press junket, and the studio, production company Amblin Entertainment and the film’s producers have refuted claims that the dog was abused or injured during the making of the film.

Director Lasse Hallstrom’s film, produced for an amount in the low-$20 million range, has a Rotten Tomatoes score of 33 percent, but a CinemaScore of A.

“Resident Evil: The Final Chapter” also hit theaters this weekend. The studio is anticipating $70 million internationally by Monday. The film’s budget was an estimated $40 million and the studio expects a gross in the low-teens for the weekend domestically. Trackers were seeing a range from $13.5 million to $18 million.

Paul W.S. Anderson wrote, directed and produced the latest film in the franchise, which again stars Milla Jovovich as the only survivor in humanity’s fight against the dead. On Rotten Tomatoes, the movie holds a score of 39 percent. Its CinemaScore is B.

The Weinstein Company’s fact-based drama “Gold,” starring Matthew McConaughey as a modern-day prospector, earned $1.15 million from 2,166 screens on Friday night. Heading into the weekend, the studio anticipated an opening in the $4 million to $5 million range.

The film, directed by Stephen Gaghan, has a Rotten Tomatoes score of 37 percent while its CinemaScore is B-.

Fox and Chernin Entertainment’s “Hidden Figures” is expected to take third place this weekend after an already stellar run at the box office. The film is looking to make another $13.5 million this weekend, bringing its total past the $100 million milestone.

After Tuesday’s Oscar nominations, many films are being re-released in theaters and are expected to get a box office bump.

TheWrap previously reported that Lionsgate’s “La La Land” and The Weinstein Company’s “Lion” are expected to gain the most at the box office. “La La Land” is expected to cross the $100 million benchmark this weekend.

“Fences,” “Arrival” and “Moonlight” should get moderate boosts from their Oscar nominations after their respective studios expanded the theater counts on Friday. Amazon Studios and Roadside Attractions’ “Manchester by the Sea” also expanded.