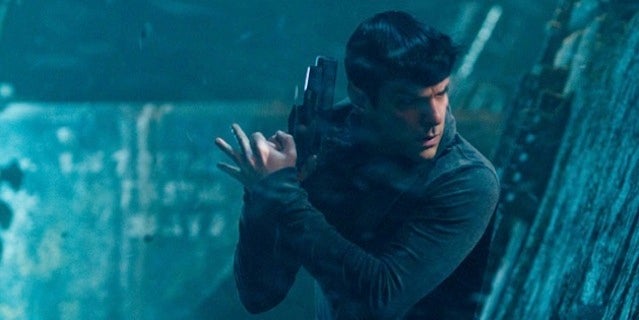 The original “Star Trek” series (and its various successors) used science fiction as a way to make observations about contemporary world issues like racism, war, etc., so it’s no surprise that J.J. Abrams‘ “Trek” reboot, now in its second installment, puts 9/11 into the mix. If there was any sort of grace period where mainstream action movies thought that audiences weren’t ready to look at terrorism redressed as entertainment, that moment has officially passed; “Star Trek Into Darkness” fulfills its title right here on Earth, with the destruction of a building in London and attacks on skyscrapers in San Francisco.

Those are only a few of the massive set pieces in the film, and the movie is by no means a dreary and mournful examination of the effects of terror in the homeland. But they happen, and they’re key to the story that Abrams and his writers are telling.

It’s a sign of Abrams’ skill as a filmmaker that the movie can travel to such dark places and still feel like an upbeat, energizing and often very funny adventure.

“Star Trek Into Darkness” begins with Capt. Kirk (Chris Pine) getting demoted to First Officer under Capt. Pike (Bruce Greenwood) after violating the Prime Directive in order to rescue Spock (Zachary Quinto) from a volcano. (Spock, of course, is such a stickler for the rules that he tells all in his report, which contradicts Kirk’s whitewashing of the situation.)

But all that changes when former Starfleet higher-up John Harrison (Benedict Cumberbatch) blows up a building in London that’s allegedly an archive but actually hides a top-secret facility. Starfleet protocol demands that captains and first officers meet with their admirals after such a breach, and Harrison opens fire on Kirk and company as they strategize with Admiral Marcus (Peter Weller) before teleporting himself onto a Klingon planet.

Marcus sends a furious, vendetta-hungry Kirk on a mission of revenge that will involve firing the experimental new photon torpedoes at Harrison’s hiding place from the edge of Starfleet-controlled space. Spock, of course, counsels Kirk not to do anything that might start a war with the Klingons, a war that Marcus thinks is inevitable no matter what happens.

Everything past this point goes into spoiler territory, but suffice it to say that the ensemble — which also includes Zoë Saldana (Lt. Uhura), Karl Urban (Dr. McCoy), John Cho (Mr. Sulu), Anton Yelchin (Mr. Chekov) and Simon Pegg (Scotty) — clicks just as well as they did last time, with the addition of Alice Eve as Carol, a science offer who may have an agenda of her own.

Cumberbatch makes a compelling villain, and not only because the layers of his plan take a while to reveal themselves. The filmmakers are clearly going for something Hannibal Lecter-ish here — he even plays mindgames with Kirk from inside a glass box — and while Cumberbatch may not reach those heights of infamy, he’s enough of a threat to put real life-and-death consequences into play.

One of the general strengths of “Star Trek Into Darkness,” in fact, is the feeling of high stakes and genuine threat, which is exceedingly hard to pull off in any long-running franchise.

As with the previous “Trek” incarnations, it’s the chemistry of the team that goes a long way in making these movies work, providing both the funniest moments (when they banter and disagree) and the most moving ones (when sacrifices are made).

Abrams makes the movie look great (he obviously doesn’t care if people make fun of his penchant for lens flares, apparently), making this a film worth the extra bucks for 3D and IMAX. Granted, the stereoscopic vision works best in the action sequences or in the vertiginous overhead shots of the city skyline of future San Francisco; it’s a little less appealing when he’s shooting a conversation close up, and a random nose pops in and out of the left side of the screen.

“Star Trek Into Darkness” continues Abrams’ gambit of retelling the “Star Trek” saga, only slightly backward and upside down, and some of his tampering with canon will no doubt solicit yowls from the usual corners of the internet. (Admittedly, I felt a little cheated by writers Roberto Orci, Alex Kurtzman and Damon Lindelof indulging in a cake-and-eat-it ending, but it’s not a deal-breaker.)

The movie may not offer the jolts of surprise that its predecessor did — no sequel can, really — but this new Enterprise remains exciting and compelling enough to make me want to follow it on any number of five-year missions.