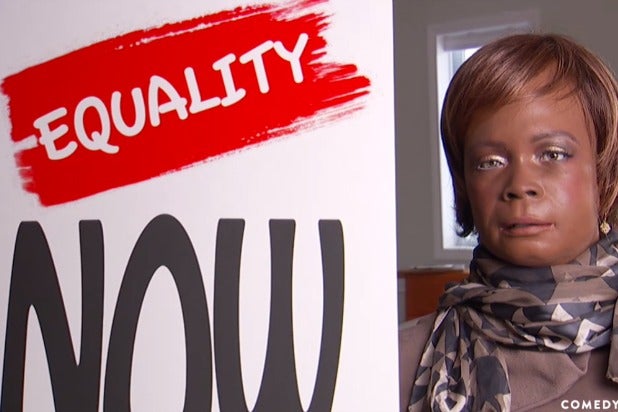 Colbert was frightened by recent news that a computer was able to supposedly pass the Turing test by tricking one out of three people into believing it was human. So he sought out another form of cutting-edge artificial intelligence.

Also read: Highest-Paid Woman CEO Used to Be a Man

The robot called Bina was built at Rothblatt’s request, and is based on the personality of her wife, also named Bina. Colbert’s report arrived just days after Rothblatt topped a New York Times list of the best-compensated female CEOs. Rothblatt, who was born male, underwent gender reassignment surgery in 1994.

Also read: The Secret Weapon Behind ‘Daily Show,’ ‘Colbert Report’ and ‘The Soup’

Among the problems with that theory? The Bina robot doesn’t seem remotely real. Or resentful.

But then Colbert made another point, by demonstrating that Bina can speak German: “She’s a robo-Nazi!” he announced.