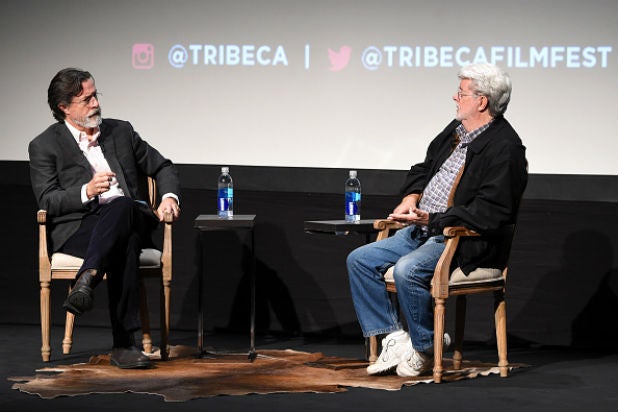 George Lucas got the chance to ask Stephen Colbert the question that has been on everyone’s minds for months: Why wouldn’t Colbert replace Jon Stewart when he leaves “The Daily Show?”

“I don’t want to be the guy to take over for Jon Stewart. I worked for Jon Stewart on that show, my memories will always be of him being the most keenest, most intelligent, most beautifully deconstructive mind, clearest thinker I have ever worked with or for,” Colbert told Lucas during a panel Friday at the Tribeca Film Festival in New York.

Colbert, who’s sporting a rather impressive beard these days, was supposed to interviewing Lucas but the director turned the tables. “I’ll never, however successful I be, get underneath shadow. Someone who doesn’t know him as well, and maybe doesn’t love him as much, might have a better time on that show than I ever would.”

Colbert was a correspondent on the long-running Comedy Central show before launching “The Colbert Report” in 2005. The last episode of his satirical news show aired in December. He is now set to take over hosting duties of “The Late Show” from David Letterman on September 8.

Stewart announced in February that he would be leaving “The Daily Show” after 15 years as the host. Trevor Noah is due to replace him, though Noah has come under fire lately for controversial comments he made on social media.