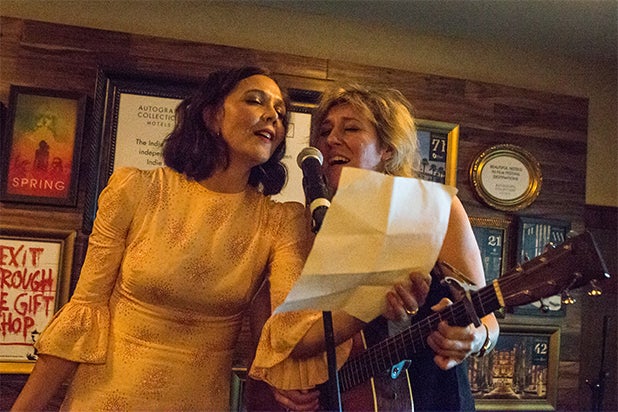 Autograph Collection Hotels & the Black List Hosted
Maggie Gyllenhaal and Martha Wainwright (Rufus' sister) sang "Papa Was a Rodeo" together on Saturday at a party for the Autograph Collection Hotels & The Black List. “I need one more drink of tequila,” she said after admitting, “my brother and I sometimes try to figure out the harmonies that [Martha] and her brother sing on some of her albums.”  Also Read: Maggie Gyllenhaal Teeters at Edge of Art and Madness as ‘The Kindergarten Teacher’ 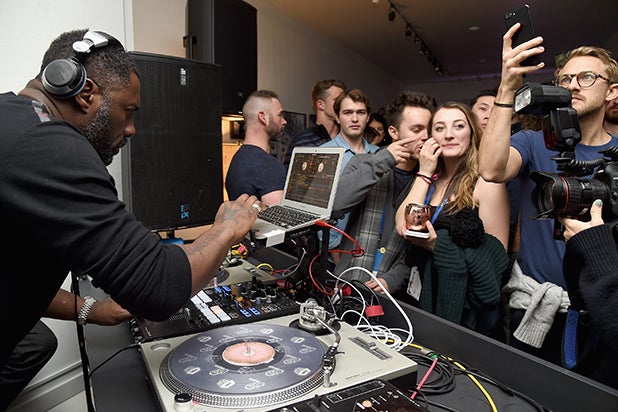 Michael Kovac/Getty Images for Grey Goose Vodka
It's my party and I'll DJ if I want to, DJ if I want to... DJ Idris Elba took over the decks on the second floor of the Grey Goose Blue Door on Saturday night during his party for "Yardie," his feature film directorial debut. This got him in a musical mindset for the night... Also Read: Idris Elba Insists He Wasn’t Thinking About Modern Race Issues With ’70s-Set ‘Yardie’ (Video) 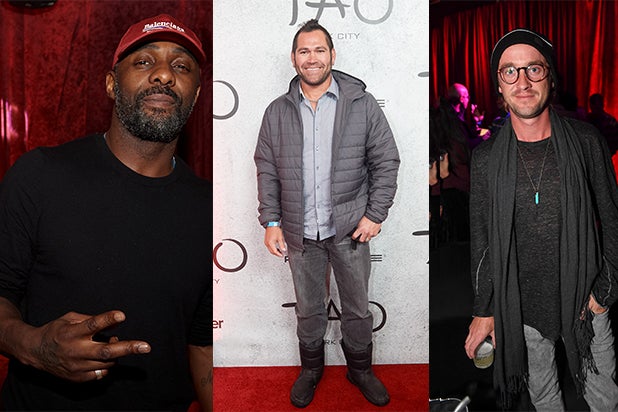 Al Powers/Powers Imagery/Tao
Elba turned up at TAO later on Saturday night as one of the featured head-turning guests. Johnny Damon and Tom Felton also made the scene at The Yard, where Don Julio's top-of-the-line 1942 magnums anchored the VIP tables. Organizers begged people who were not on the list to get Ubers to avoid being stranded outside in the cold. They put out several PSAs during the day on Instagram to ease congestion after a crowd of several hundred waiting outside in the snow on Friday night tried to get access. 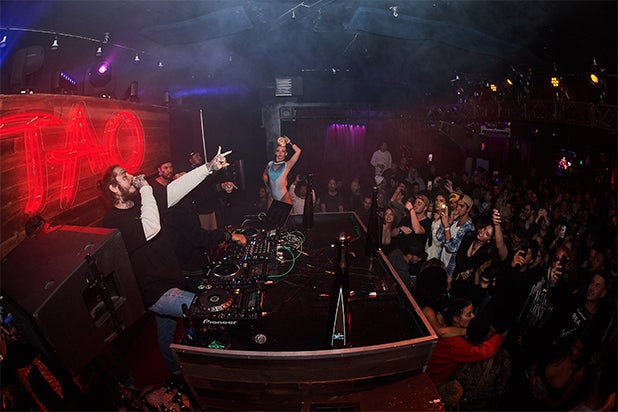 Al Powers/Powers Imagery/Tao
Post Malone burned the promoters at Park City Live. After performing a sold out show there earlier on Saturday night, he made a second (unannounced) stop at Tao, rolling in at 2 a.m. with a sizeable entourage. They took over the DJ booth from DJ Politik to perform "White Iverson" and  "Congratulations."  Posty's next stop: Coachella in April.  Also Read: Sundance 2018: A Music Fan’s Guide to Concerts, Appearances in Park City 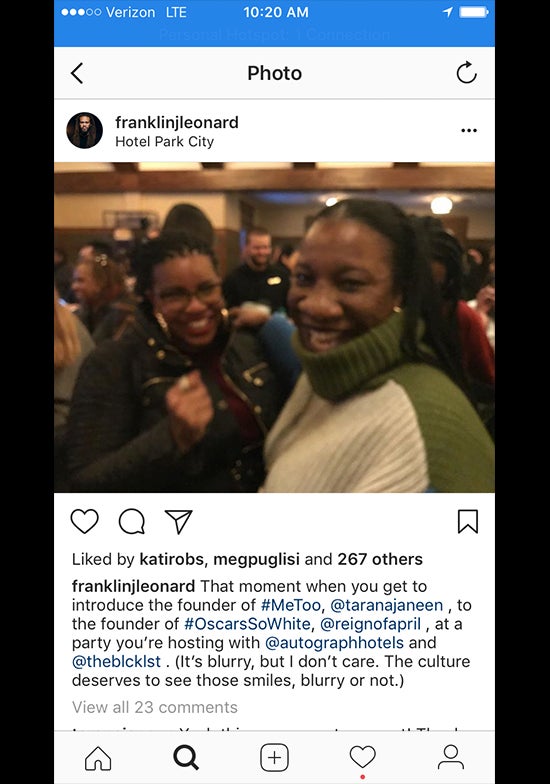 Courtesy of Franklin J. Leonard
The Black List founder Franklin Leonard captured a historic meet-up: #OscarsSoWhite founder April Reign (left) and #MeToo Founder Tarana Burke linked up at a Black List event. "It's blurry, but I don't care," Leonard wrote. "The culture deserves to see these smiles, blurry or not." 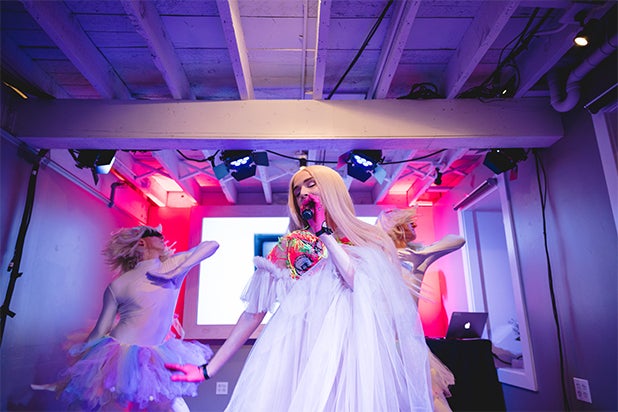 YouTube
Seeing digital cipher Poppy in person is an odd experience because there are no cracks in the "part-android/part-human" performer online.  She headlined YouTube's house party on Saturday night, a party where people actually danced. Sam Ronson DJ'd the bash. Poppy will remain in the snow for a few days, as her new YouTube Red Original series "I'm Poppy" debuts as a festival selection on Tuesday. 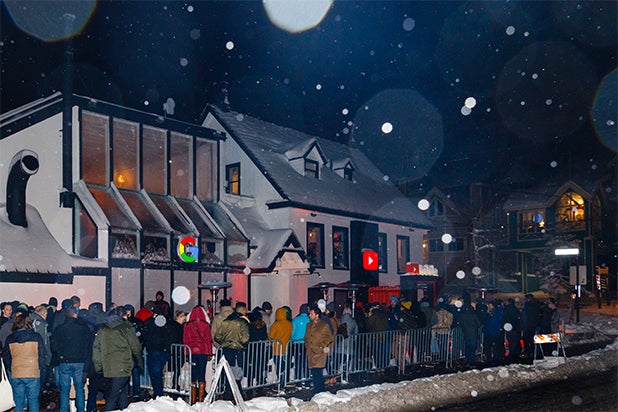 YouTube
A view of the line outside on Saturday night. Google/YouTube Space on Heber is a two-story venue that has been a restaurant and the home of NBCUniversal's parties in the past. YouTube is not crashing the Sundance scene. This is the sixth year that they have been the official sponsor of the festival's Shorts program. Also Read: YouTube Grabs Rights to Eminem-Produced Film ‘Bodied’ 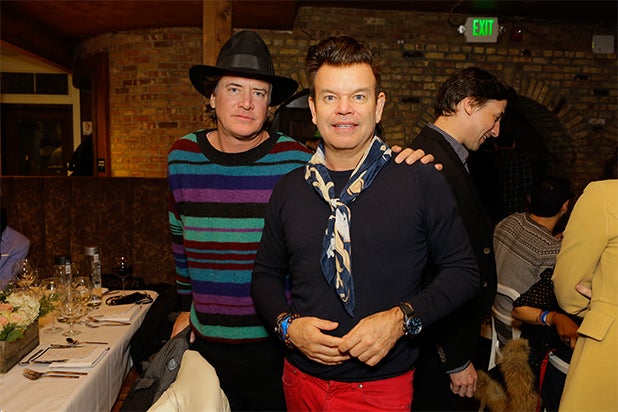 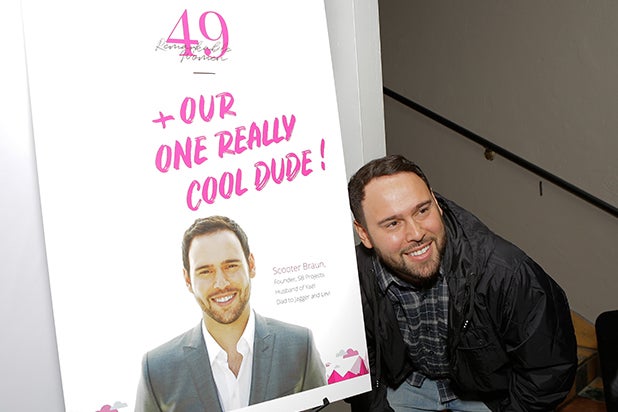 Tiffani Rose
The "1 really cool dude" was Scooter Braun. Gloria Allred addressed him from the podium: “Scooter, you’re the one cool dude, because I've sued all the rest." Also Read: Gloria Allred on Daughter Lisa Bloom Working for Harvey Weinstein: ‘I Would Have Declined’ 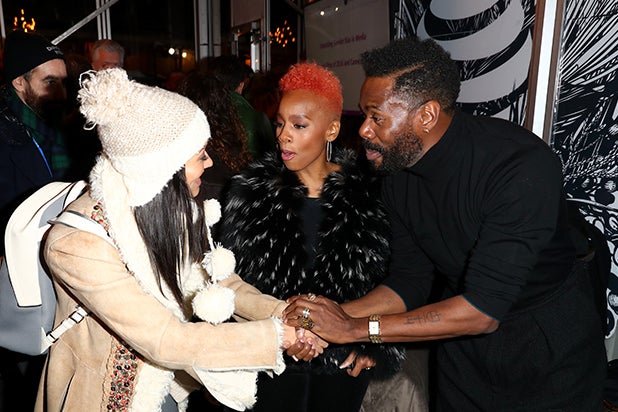 Getty Images
Geena Davis threw a party to promote her Bentonville Film Festival, an emerging event in Arkansas each May that focuses on female voices in cinema. Here, Janina Gavankar of "Blindspotting," Anika Noni Rose and Colman Domingo (both of "Assassination Nation") enjoy Davis' hospitality inside the DIRECTV Lodge presented by AT&T. 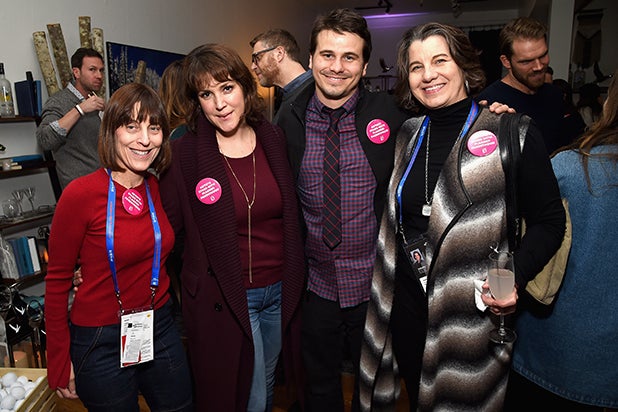 Michael Kovac/Getty Images for Grey Goose Vodka
Remnants from the Respect Rally earlier in the day -- like signs and Planned Parenthood pink buttons  --  floated around Park City on Saturday. Here, Caren Spruch, Melanie Lynskey, Jason Ritter and Dawn Laguens were still rally-ready at "The Tale" party that night.  Also Read: Common, Jane Fonda and the Scene at the Respect Rally in Sundance (Photos) 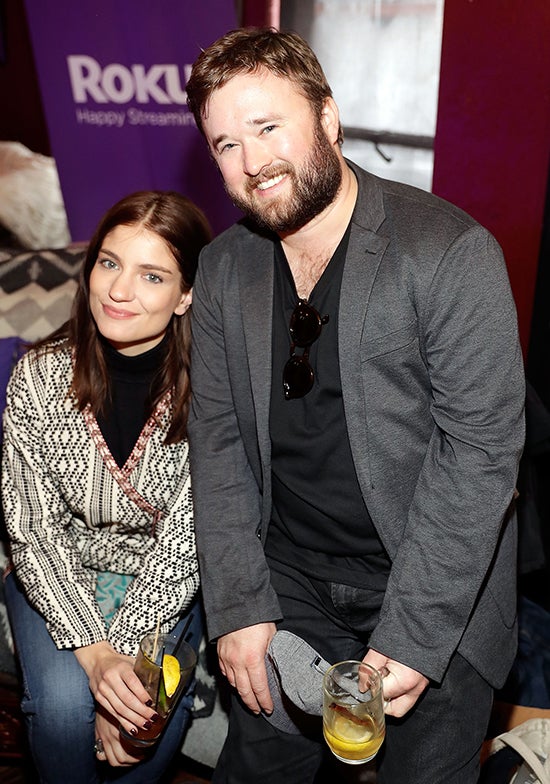 Isaac Brekken
After the march, people ducked into bars to get out of the snow and slush. Here, Bridey Elliott and Haley Joel Osment found Rock & Reilly's hideaway. As one of the last places slinging swag in the post-gifting suite era, Roku handed out the Streaming Stick+ to some VIPs. 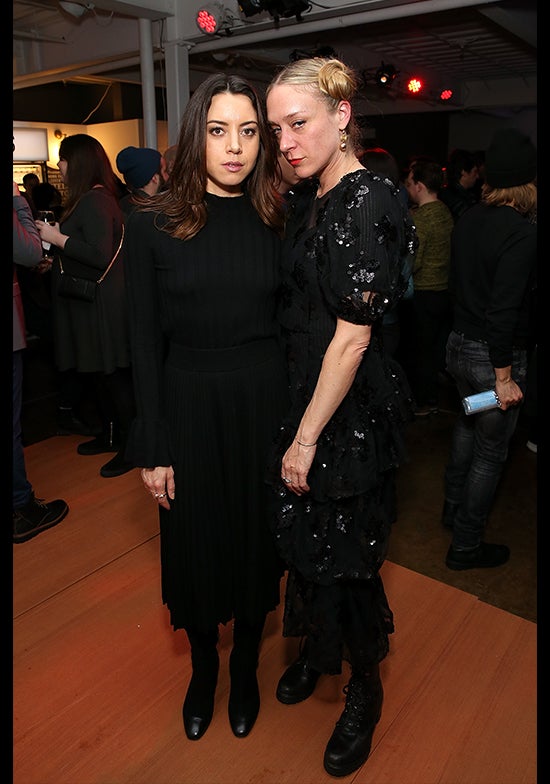 Getty Images
Aubrey Plaza was the toast of the 2017 festival by stalking Elizabeth Olsen in "Ingrid Goes West." This year, she came to support Chloe Sevigny at the after party for "Lizzie," one of the buzzy titles around town. The Lizzie Borden story, about the woman accused of killing her father and stepmother in Massachusetts in 1892, had a packed party Friday night at Cafe Artois. 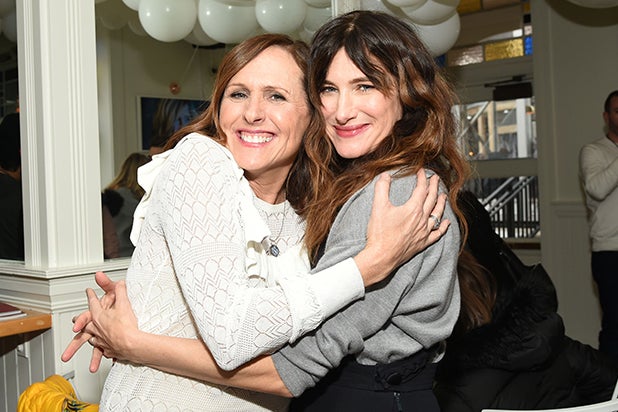 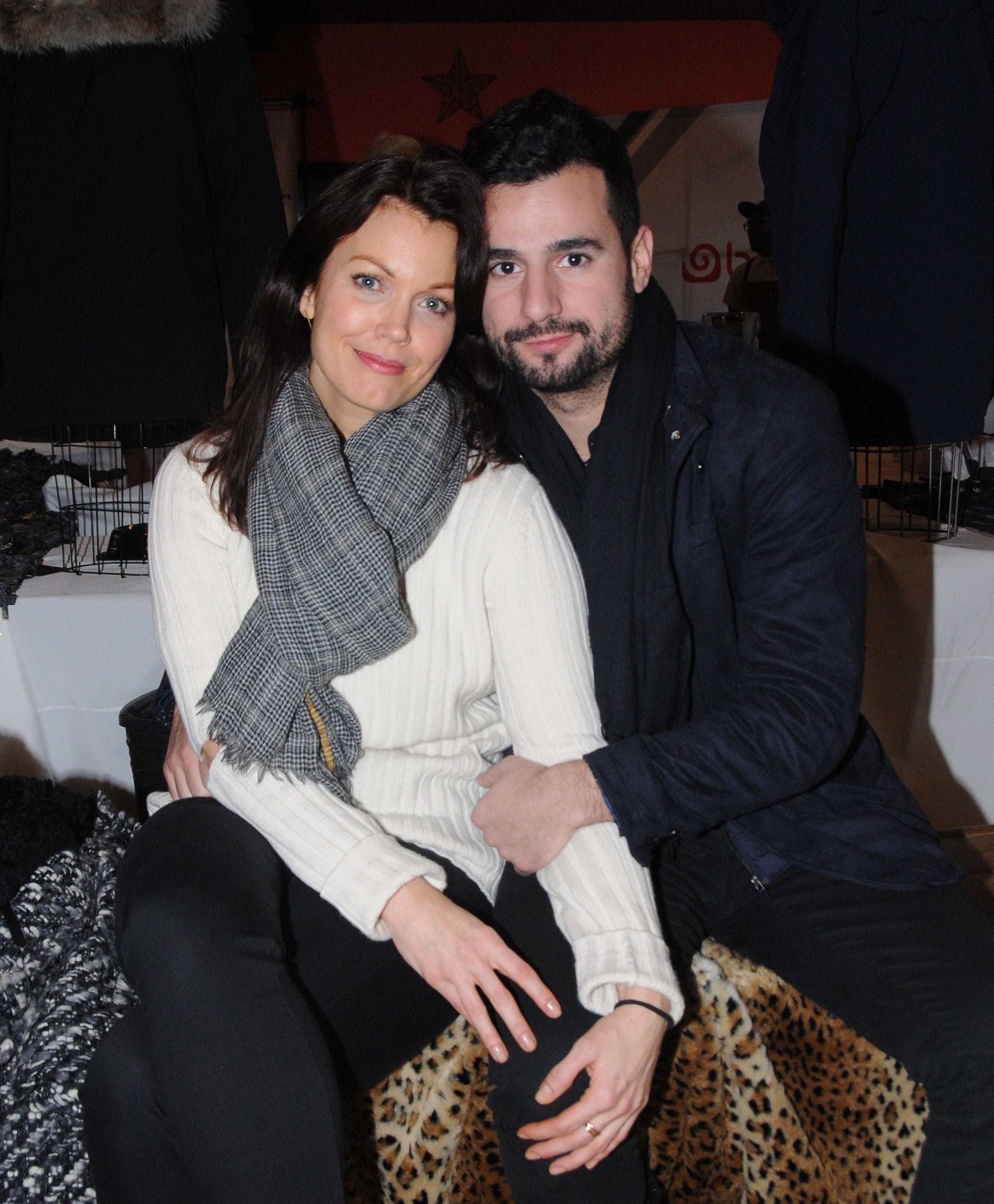 Paul Best/Getty Images
"Scandal's" Bellamy Young and Ed Weeks took a break  at Debbie Durkin's Ecoluxe Lounge, the last gifting suite of a bygone era of freebies in every nook along Main Street. 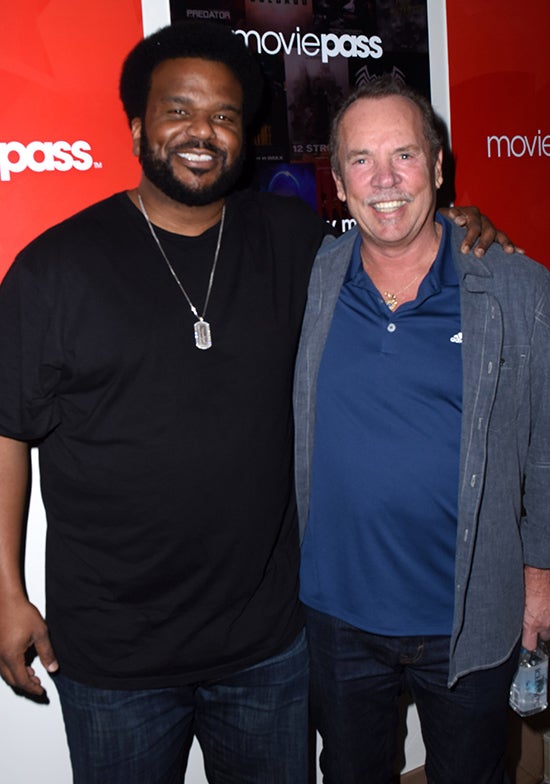 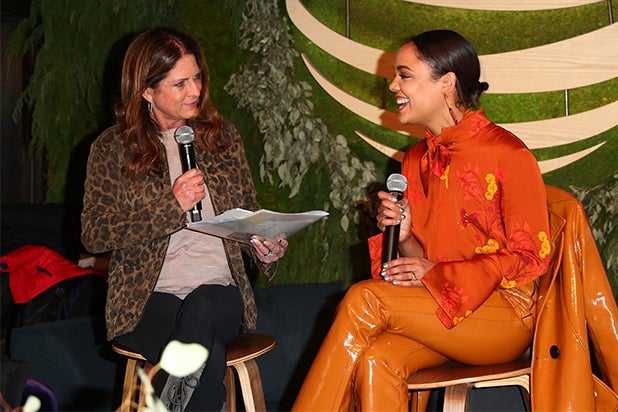 Joe Scarnici/Getty Images for AT&T
Women In Film President Cathy Schulman chatted with Tessa Thompson about the state of women in the entertainment industry at the Friday night dinner at the DIRECTV Lodge presented by AT&T.  After Sundance, WIF announced that Emma Stone will be co-hosting their event toasting female Oscar nominees on the Friday night before the big show. 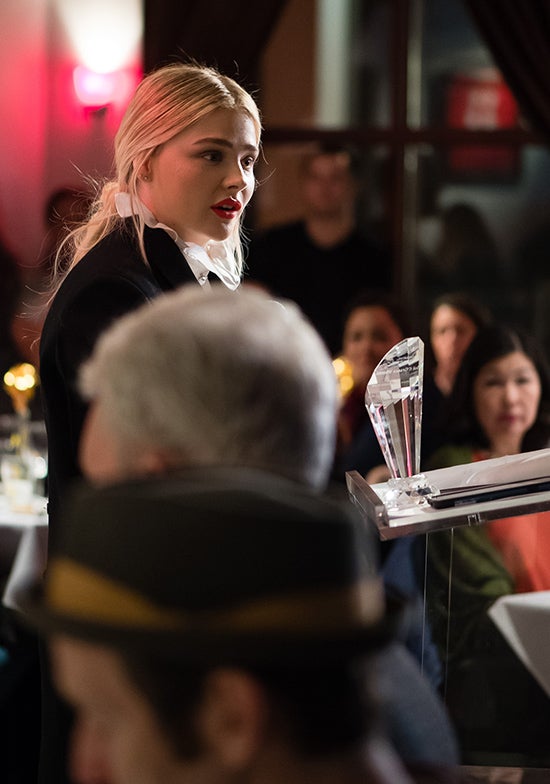 Lu Chau/Photagonist.ca
The titular star of "The Miseducation of Cameron Post," Chloe Grace Moretz, accepted one of the Creative Coalition's Spotlight Awards at their annual dinner gala on Sunday night (Jan. 21). “We made this film about a girl that gets sent to gay conversion therapy after being caught with a girl," Moretz said in dedicating the award to the LGBTQ community. "This is still legal in 45 out of 50 states.” Also Read: Sundance 2018 #CelebSightings: Usher, Naomi Watts, Chloe Grace Moretz Cruise Around Park City (Photos) 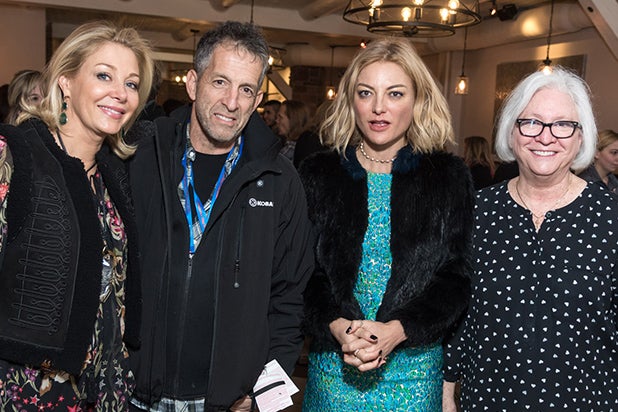 Lyman Winn
Nadja Swarovski, Kenneth Cole, Lucy Walker, and UCLA TFT Dean Teri Schwartz huddled at a private screening of the documentary 'Waterschool' on Jan. 20. Dean Schwartz was there because the film was created by UCLA TFT graduate students in partnership with Swarovski. Right after this event, the film traveled to Davos, where it to be screened at the World Economic Forum later in the week. 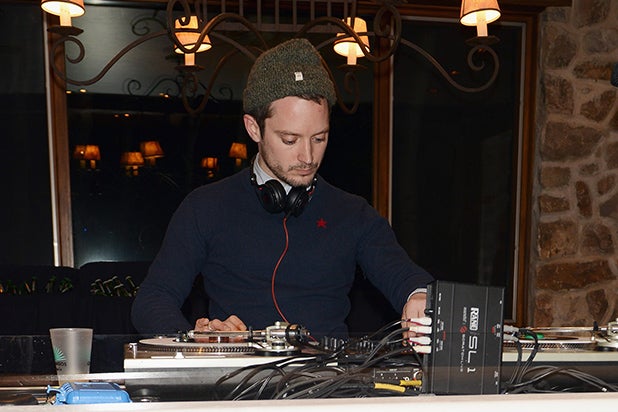 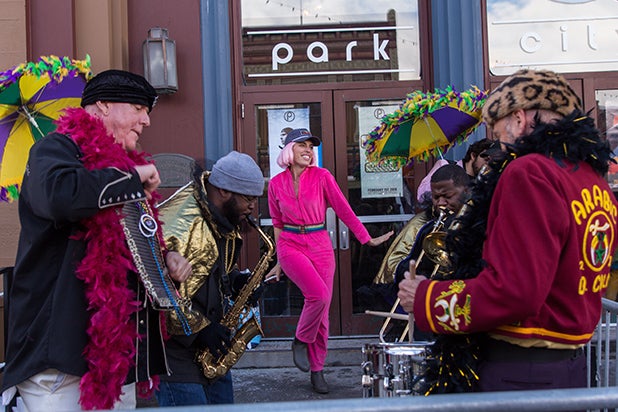 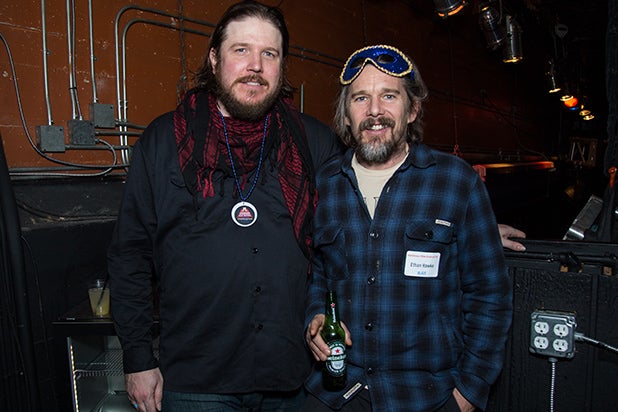 Erica Rascone
Inside, the star of Ethan Hawke's "Blaze," Ben Dickey, and the director himself were the marquee talent. Dickey won the special jury award for acting. The Louisiana International Film Festival takes place April 19- 22, 2018 in Baton Rouge. 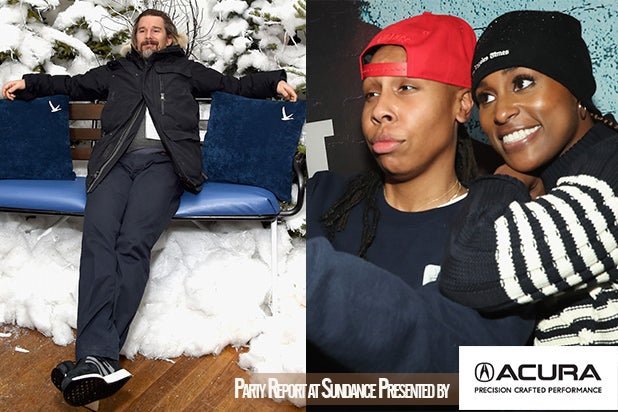