If you were wondering when you were going to be able to interact with your favorite princess-saving plumber, wonder no more: today Universal Studios Hollywood announced that its Nintendo-themed land, Super Nintendo World, will be opening in 2023.

The first Super Nintendo World opened in 2021 at Universal Studios Japan to strong reviews and word-of-mouth. While the details of the Hollywood version have yet to be officially finalized, the Japanese version included a kid-friendly Yoshi-themed dark ride that traveled in and out of an elaborate show building, and a “Super Mario Kart” attraction that used augmented reality, HD screens and cutting-edge effects.

Work is currently being done on a third attraction at the Japanese theme park, a Donkey Kong-themed rollercoaster, which is not expected to be in the Hollywood version. (Conceivably the Japanese expansion and the Hollywood land could open around the same time.)

Super Nintendo World is also rumored to be one of four lands that will comprise Universal’s upcoming Epic Universe theme park in Orlando, just a short jaunt from their cluster of theme parks (Universal Studios Orlando and Islands of Adventure), a water park (Volcano Bay) and several hotels. 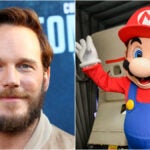 “The immersive land will be a visual spectacle of vibrant colors and architectural ingenuity located within a newly expanded area of the theme park, featuring a groundbreaking ride and interactive areas, to be enjoyed by the whole family. Themed shopping and dining will enhance the entire experience,” according to the official press release.

The new land will be located on Universal Studios Hollywood’s lower lot, near popular attractions like the recently rethemed Jurassic World: The Ride and Transformers: The Ride 3D.

And if you’re really, really excited about next year’s opening, you can get a jump on the merchandise very soon. Universal and Nintendo play to convert a section of the Feature Presentation retail space, located just within the turnstiles of Universal Studios Hollywood, into a Super Nintendo World-themed retail outpost.

“Guests will have a chance to share their excitement for the land’s 2023 arrival by gearing up with merchandise such as Mario and Luigi themed apparel and iconic character hats,” according to the official release. “A selection of plush characters, including Yoshi, Mario Bowser and Luigi in a variety of sizes, will also be among the many fun items available for purchase.” Are Mario hats the new Harry Potter wands? Only time will tell.

What’s interesting is that Universal and Illumination’s untitled Mario animated feature, with Chris Pratt, Anya Taylor-Joy, Jack Black and Seth Rogen voicing classic characters, is due out this Christmas. Seems like that might have been a good time to get the land open, for maximum synergistic purposes. Hopefully by “2023” Universal means “early 2023.”