The final season of “Supergirl” begins Tuesday, when the first of 13 remaining episodes premieres. Fans are a bit worried, not for the episode itself, but for the events it might be setting up. But don’t worry; series star Nicole Maines is here to offer her support — well, sort of.

During the “Supergirl” hiatus, pictures were taken by onlookers at filming locations and circulated the internet. And while generally it’s hard to put much stock into such photos, considering there is almost no context for what’s actually happening, it was hard for fans to not worry when they saw some of their “Supergirl” favorites — including Maines’ Dreamer and Katie McGrath’s Lena Luthor — lying among some rocky debris.

And Maines is well-aware of that panic. “We all got up! I can answer that, we all got up,” Maines joked with WrapWomen. “A little worse for wear but, yeah.” 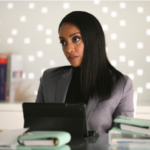 But when it comes to the fate of the characters in that moment — and in the season as a whole — Maines is staying tight-lipped. Asked point blank if everyone will survive the season finale, Maines only offered coy sentiments.

In terms of Nia Nal’s personal storyline in the final episodes, Maines could tease a little more, saying that her character will be tying up some loose ends. Apparently, the return of her mother is one of those loose ends, as we briefly see Kate Burton’s Isabel Nal pop up in the trailer for the back-half of the season.

As for the true fate of the “Supergirl” characters, we’ll simply have to wait and see how things play out. You can watch Maines’ coy words in the video above.