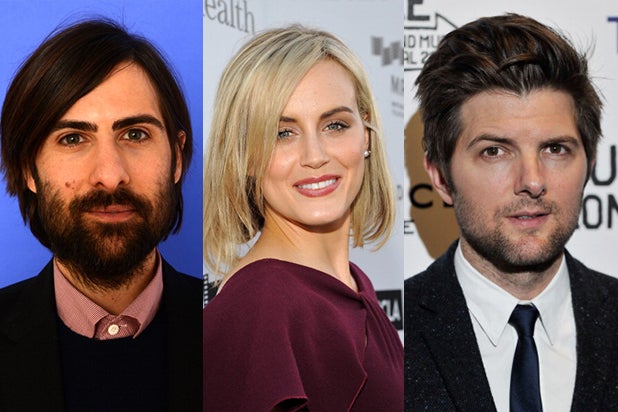 Taylor Schilling, Adam Scott, Jason Schwartzman and Judith Godreche are set to star in the indie comedy “The Overnight,” TheWrap has learned.

Mark Duplass is producing for Duplass Brothers Productions along with Naomi Scott, who runs Gettin’ Rad Productions with her actor-husband, Adam.

Patrick Brice is directing the film, for which plot details were not immediately available, though production is currently under way in Los Angeles.

Brice and Duplass recently collaborated on the horror comedy “Creep,” which Brice directed and stars in alongside Duplass, who produced with Jason Blum. The film has already spawned a pair of sequels that are in development at Radius-TWC.

Schilling stars in Netflix’s “Orange Is the New Black,” which starts its second season in June. She also stars opposite Aidan Quinn in the indie drama “Stay.” She’s repped by the Gersh Agency and 3 Arts Entertainment.

Scott, who can currently be seen on NBC’s “Parks and Recreation,” next stars in “Hot Tub Time Machine 2,” which hits theaters this Christmas. He’s repped by WME.

Schwartzman, who recently co-starred in “The Grand Budapest Hotel” and “Saving Mr. Banks,” will soon be seen in Tim Burton‘s “Big Eyes” and the indie movie “Listen Up Philip,” which premiered at Sundance and is seeking distribution. He’s repped by WME.

Godreche is a veteran French actress who recently appeared in Park Chanwook’s “Stoker.” She’s repped by CAA and Untitled Entertainment.