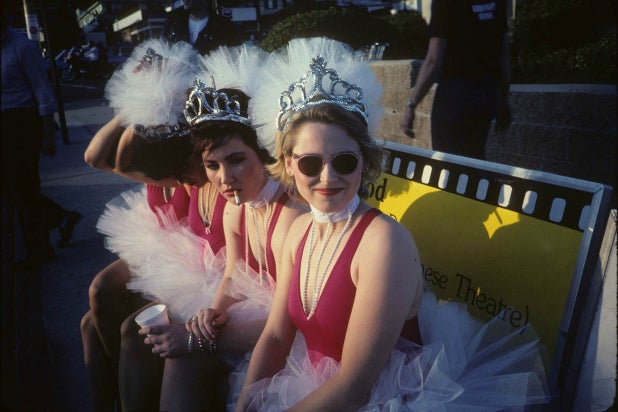 The meteoric and ruinous rise to fame is more than a movie cliché; it’s a virtual guarantee for just about any artist without his or her head screwed on straight. But “The Go-Go’s” tackles the seminal all-female ’80s rock band with such honesty, openness and effervescence that it not only rises above that clichéd, almost telegraphed arc but transcends the ranks of other music documentaries to offer a story you desperately want to keep watching, even when you already know where it’s going.

It’s fascinating to think of the performers of “Our Lips Are Sealed,” “Head Over Heels” and even their earliest hit “We Got the Beat” as punk rockers, but “The Go-Go’s” reminds audiences of the band’s scrappy origins as a group of young women inspired by the Los Angeles punk scene to start their own band. Though members Belinda Carlisle, Jane Wiedlin, Gina Schock, Charlotte Caffey and Kathy Valentine deny any sort of feminist agenda, the group formed in the late ’70s and quickly scaled local line-ups — and eventually, the pop charts — as the first multi-platinum-selling all-female band to play their own instruments, making history and blazing a trail for dozens upon dozens of future artists.

Declining narration or a superfluous framing device, director Alison Ellwood (“American Jihad”) allows all five musicians, as well as interim band members and former manager Ginger Canzoneri, to tell their own story, coaxing a matter-of-fact, almost shockingly candid account of their success (and eventual implosion) both artistically and commercially.

Anyone familiar with the band in the ’80s might expect front woman and vocalist Carlisle to occupy the majority of the spotlight, but each enjoys equal time on screen to explain and explore what inspired, motivated and sometimes undermined their efforts.

Caffey, for example, emerged early as lead songwriter, writing eight of 10 songs from their 1981 debut, while apparently nursing a heroin addiction she somewhat successfully hid from the rest of the band. Unsurprisingly, commercial success took a toll on the group as they shuffled breathlessly — and repeatedly — from album to tour and back again, leading to confrontations first with Wiedlin, who felt increasingly marginalized creatively, and later, with Schock, whose remuneration was substantially less than that of the rest of the band. Each recounts the details with an equal amount of kindness, bitterness and perspective, and a sense that they were so close for so long and in such a concentrated moment in time that it created both inevitable conflict and irrepressible affection.

Certainly Ellwood’s access and the openness of the band members assist the cheerfully iconoclastic tone of this Go-Go’s history lesson. But combined with the way she draws out stories about the creation of signature tunes like those mentioned above, viewers get a really rich and compelling sense of how the group evolved from a bunch of restless, ambitious young women into one of the biggest bands in the world, just by crafting some of the most indelible hits of the 1980s. Not only does the film make you want to revisit their albums and replay those songs, but it also creates a real sense of personality and identity for all of the members that will enhance future listens of lesser-known cuts.

It’s hard to know if The Go-Go’s can flourish now in the same way they did back in 1981, especially after so many torch-bearers and imitators picked up where they left off. Ellwood documents both the rise and fall and the ultimate redemption of the band personally and artistically, and they do indeed still rock.

See Photos: 11 Rock Documentaries You Can Stream Now, From 'Don't Look Back' to 'Amy'

But the great victories of “The Go-Go’s” highlight how these women (1) spearheaded an essential, permanent musical movement; (2) escaped addiction, evaded the financial vagaries of the music industry and most of all physically survived their rock ‘n roll glory days; and (3) moved past the clashes and conflicts that derailed their past success and reunited to seek it again in the future.

Between 1978 and 2020 there have been a lot of definitions of “girl power,” but Ellwood’s film suggests that one of the most important, and enduring, is a capacity for forgiveness. Seldom does a music documentary successfully argue for the merits of individual (or collective) musicians as effectively as the iconic songs they created, but “The Go-Go’s” uniquely manages to showcase the essential, resilient, irrepressible humanity of their history every bit as vividly as it celebrates their art.