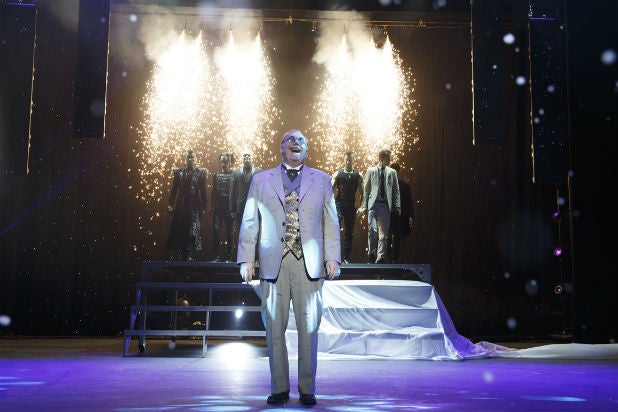 The producers of that ill-fated “Houdini” musical starring Hugh Jackman can let out a collective sigh of relief that their star decided not to do the show. “The Illusionists: Witness the Impossible” opened Thursday at the Marquis Theatre and there’s no way a tuner based on the life of the world’s most famous illusionist could possibly be any more fun and awe-inspiring than this new magic show on Broadway.

First off, there isn’t one great illusionist.  “The Illusionist” stars seven, and even the very talented Mr. Jackman could not pull off Houdini’s most famous stunt — an escape from a huge water tank — with the thrilling reality that Andrew Basso (The Escapologist) brings to it.

See photos: 11 Hollywood Stars Who Did Big Business on Broadway in 2014 (Photos)

As the audience is told, what Basso performs here — picking handcuffs and locks, all the while submerged under water for over three minutes with his feet shackled — is no illusion or trick. Anyone who’s ever seen newsreels of Houdini performing this feat, or others like it, has wanted to go back in time to experience first-hand the cheesy excitement of seeing a brilliant stunt performer at work risking his life. Here’s your chance.

Especially effective is the shameless intro to Basso’s showstopper. Emcee Jeff Hobson (who also does great, funny card tricks as The Trickster) reveals that Basso nearly died performing the water-tank stunt at the Sydney Opera house in front of a sold-out audience. Presumably, almost killing yourself in front of a couple thousand people makes the experience worse or better, depending on how you look at it. The only thing missing is the guy Houdini used to hire, standing with an ax in hand to break the glass and let the water flood the stage if something went wrong.

Basso appears just this once in “The Illusionists,” at the end of the first half. Maybe holding your breath for more than three minutes under water is a once-a-day event. Pray for him on matinee days.

“The Illusionists,” directed by Neil Dorward, relies a bit too much on audience participation. But it is a magic show, and sometimes the hoi polloi from Jersey or the Bronx do bring an edge of reality to the tricks.

Frankly, I have no idea how Kevin James (The Inventor) chops a man in half and then spins his head and torso around the stage, the other half of him somewhere offstage. Or how Adam Trent (The Futurist) makes a table float.

The scariest moment in the show, however, involved a woman from out of town who really, really didn’t want to play a game of Russian roulette with the very Goth and genuinely weird Dan Sperry (The Anti-Conjuror). By the way, what is an anti-conjuror? Whatever, in addition to creeping people out, Sperry conjures up a whole menagerie of flying birds from his Count Dracula get-up. Truly amazing.

This magic show is perfect for the kids. Better yet, it makes you feel like a kid again.

“The Illusionists: Witness the Impossible” runs through January 4 on Broadway before embarking on a multi-city tour of the United States.