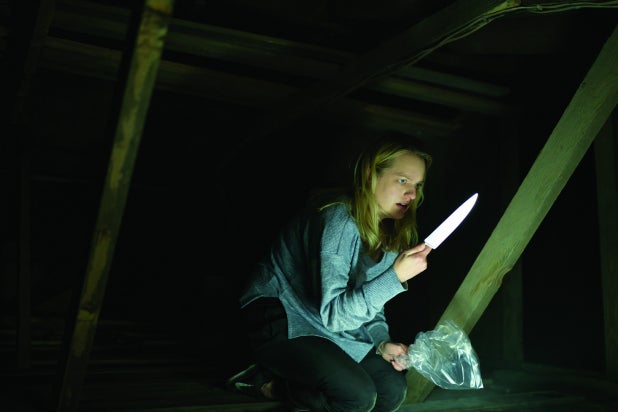 The old Universal Horror movies didn’t get much better than James Whale’s “The Invisible Man,” a cackling madman of a film, which followed the horrible misadventures of a scientist who turned himself invisible and wreaked havoc on the world, mostly because he could.

It’s wicked, it’s fun, and in many respects it’s the polar opposite of Leigh Whannell’s absolutely terrifying new reboot, a movie that cares a hell of a lot more about the title villain’s victims than it does about the old invisible bastard.

Whannell’s fiendish reinterpretation of H.G. Wells’ original story casts Elizabeth Moss as Cecilia Kass, a woman who flees her rich, abusive boyfriend at the beginning of the film, and suffers from paranoia and agoraphobia as she struggles to reclaim her life. The only way Cecilia believes Adrian Griffin (Oliver Jackson-Cohen, “The Haunting of Hill House”) will ever let her go is if he’s dead, and it comes as an enormous surprise to discover that he is.

What’s more, Griffin left Cecilia his enormous wealth, which she plans to use to rebuild her life and reward the friends and family who helped her escape Griffin’s possessive wrath. But even though he’s allegedly quite deceased, Cecilia can’t quite shake the feeling that he’s still watching her. Lurking. In the room. Right now. But that would be silly — if the title of the movie weren’t “The Invisible Man,” of course.

Whannell’s canny screenplay knows that the audience is well ahead of Cecilia, and the sinister camerawork is on it too. Many a scene in “The Invisible Man” finds cinematographer Stefan Duscio’s (“Upgrade”) frame listing, with apparent aimlessness, to one side or another. The visual language of “The Invisible Man” would be the same as if you could see the manipulative monster in every scene. But you can’t. It’s such a simple trick that it’s almost hard to accept how unnerving it is.

Fortunately, it doesn’t take Cecilia too long to figure out that Griffin is alive. Convincing everyone else is going to be nearly impossible, especially with him manipulating her life in disturbing ways that alienate her support system, convince the authorities she’s not in her right mind, and all manner of other disturbing, real-life tricks that would be plenty creepy if the culprit wasn’t completely invisible, and probably standing right behind you right now.

Whannell got wrapped up in the mechanics of his previous sci-fi thriller “Upgrade,” a sharp, somewhat overstuffed thrill ride that played like Paul Verhoeven got his budget slashed but refused to cut any of the cool ideas out of his script. “The Invisible Man” doesn’t get stuck on the technical details of invisibility, the rules of engagement with an invisible assailant, or any other geeky side-notes (although a passing reference does imply a connection to the “Upgrade” universe).

Whannell’s film is not about how cool, fun or interesting the premise is. It’s just about how unbelievably scary it would be if your abusive ex had the freedom to exact whatever sadistic horrors they wanted upon you, and how goose-bumpingly creepy it would be to suddenly see a knife floating in the air in front of you.

Going back to basics works wonders for “The Invisible Man,” even though the new version has so little to do with H.G. Wells’ original story that Wells doesn’t seem to be credited. Anywhere. At all. Not even a “Special Thank You.” Maybe he turned invisible too.

At the center of it all is Moss, giving a bravura horror movie performance that sprints from absolute reality to fantastical realism to inspired rebellious heroism at a breathless pace. It’s striking to see supporting cast members like Storm Reid (“A Wrinkle in Time”), Aldis Hodge (“Clemency”), Harriet Dyer (“The InBetween”) and Michael Dorman (“For All Mankind”) represent, at turns, her support system and the Invisible Man’s victims. But they’re all here to support Moss’s incredible turn as a woman whose whole world is being manipulated, whose desperation to take back control of her life gets misinterpreted, tragically, at almost every turn. And watching her fight for her life against the title monster is a feat of physical acting, not to mention a devilishly effective visual effect.

“The Invisible Man” demands to be seen, because this is the right way to reboot a horror movie. Writer-director Whannell has thrown all the world-building and fan service out the window, until all that was left were the elements that made an invisible maniac such a terrifying premise in the first place. There’s no extraneous storytelling here, no scene that feels unnecessary, no scary moment that plays like it’s pandering. This is the expertly told, horrifying story of an abusive relationship filtered through the lens of a classic horror movie monster.