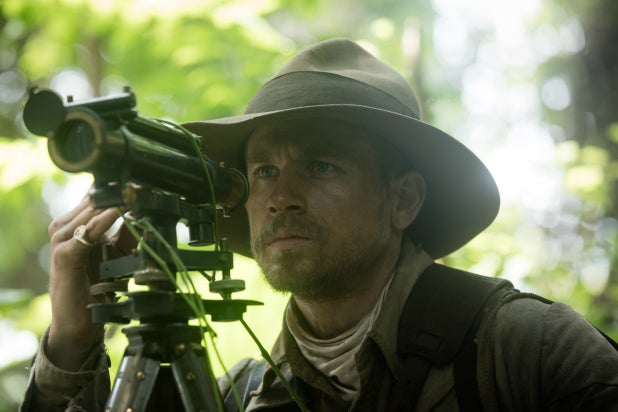 “The Lost City of Z” is a movie about the glory of perseverance, not the cost of it. Director James Gray held on to the idea of making a film of David Grann‘s 2009 book of the same title with a fervor that matches the hero of Grann’s non-fiction narrative, a British explorer named Percival Fawcett who spent the early parts of the 20th  century searching for a lost Amazonian city. Gray suffered through several setbacks with financing of this project until he finally got the money he needed and set out to shoot in the jungle on 35mm film.

There is nothing at all negative or even ambivalent about Gray’s portrayal of Fawcett (Charlie Hunnam), his wife Nina (Sienna Miller), or other members of the expeditions like Henry Costin (Robert Pattinson) and Fawcett’s own son Jack (Tom Holland, “Captain America: Civil War”). Gray seems to find these people marvelous and admirable, and he shoots them attentively and adoringly so that we can get to love them just as much as he clearly does.

Most directors would have approached “The Lost City of Z” in one of two ways: Fawcett could have been seen as a flawed dreamer who brought pain to both his family and others around him, or he could have been brightly viewed as a heroic man with a mission, but the subtle Gray has carefully worked out a rather distant yet sensual middle ground between these two obvious choices.

Gray has always been a methodical, highly cautious director — and that caution of his has led to exquisite films like “We Own the Night” and “Two Lovers” — but his work was beginning to seem a bit too small or too gloomily constricted. “The Lost City of Z” is an attempt at an entirely different kind of film for Gray, and the results are revelatory and expansive while also true to his own complicated creative character.

“The Lost City of Z” is not a conventional or crowd-pleasing sort of movie. It runs 140 minutes, and it often moves like a lusciously tempting fantasy of freedom or like a hazy memory connected by either old-fashioned dissolves or hard cuts between images to represent fleet-footed thoughts. Gray isn’t afraid to let the narrative drift in a daydreaming sort of way to reflect the state of mind of his characters. Fawcett’s search for a lost city in the Amazon jungle might have been just a metaphor for filming this difficult project, but Gray is after bigger game here.

Gray takes chances with the structure of this picture, discretely moving back and forth in time and not bothering with forward momentum or even any particularly “dramatic” scenes, for Gray does not have the instincts of a dramatist but rather the skillset of a musician or a painter working with film. Since Fawcett is a born explorer, it often feels as if Gray himself were exploring how he could tell this story, and he never wants to settle on anything obvious.

In Gray’s previous movies, men and women were shown as trapped by their family life and by their milieu, but “The Lost City of Z” is about people doing anything they can to escape and transcend their environments. What’s so intoxicating about this film is that Gray convincingly suggests that a really spirited person of either gender can find ways to make sure that their reach can exceed their grasp.

A particular achievement here is Gray’s treatment of Fawcett’s wife Nina. In countless movies, we watch a male lead driving the plot while his wife or girlfriend sits at home and alternates between smiling patiently and complaining impotently. As filmed by Gray and played by Miller, Nina Fawcett is an adventurous woman herself and a textured rebuke to all those “wife at home” roles.

Nina aids her husband and tries to be his partner in the search for the lost city whenever she can, and she even wants to go along with him on one of the expeditions, but while Fawcett is seen as a progressive in some areas, he’s definitely a man of his time when it comes to how he views his wife.

“You’re real,” Nina says quietly at one point, lightly touching her husband’s handsome head as if his stay at home were just a mirage. In the last section of “The Lost City of Z,” when Fawcett has gone off one more time with their son Jack to search for the lost city, Miller’s Nina reaches a point of spiritual exaltation that matches up exactly with what we see of her husband. Gray makes us feel that these two people were ideally suited to each other.

The last shot of Gray’s “The Immigrant” was so lyrically expressive of the fates of his characters that it was indelible, but he tops himself with the last shot of “The Lost City of Z,” which surprisingly blends knock-out visual beauty, tender feminism, overall personal inter-connectedness, and something else, too, something yearning and just out of reach. (“To look for what is beautiful is its own reward,” Nina says toward the end of this film.)

“The Lost City of Z” feels like a clear artistic advance for Gray, who proves himself here as one of our finest and most distinctive living filmmakers.