From the opening shot of the crumbling Hollywood sign, it’s clear that “The Nice Guys” is going to be director Shane Black‘s attempt to capture not only the shabby decadence of 1977 Los Angeles, but also the grimy, down-and-dirty feel of decade-defining cop comedies like “Freebie and the Bean.”

(Black knows a thing or two about decade-defining cop comedies, having revitalized the genre with “Lethal Weapon,” which spawned plenty of sequels and copycats in the 1980s.)

But there’s a tipping point at which comedy goes from black to bilious, and that’s a balancing act that “The Nice Guys” doesn’t always nail. The laughs from this frequently entertaining action comedy get stuck in the throat, keeping this altogether good movie from being a great one.

The whodunit plot here (which Black co-wrote with Anthony Bagarozzi) is thoroughly convoluted and ultimately meaningless, but it boils down to rival private eyes Holland March (Ryan Gosling) and Jackson Healy (Russell Crowe) morphing from bitter rivals to grudging pals. March has been hired to investigate the mysterious Amelia (Margaret Qualley, “The Leftovers”), but she in turn has hired Healy to scare off the man she says is stalking her.

Healy thinks his work is done once he breaks March’s arm, but then Amelia goes missing, and two goons show up at Healy’s apartment (above the Comedy Store on Sunset Blvd,. of all places) trying to find her. The two gumshoes must team up to find her, particularly when it becomes clear that Amelia is being pursued by representatives of both the automotive and adult-film industries, to say nothing of agent Judith Kutner (Kim Basinger) of the Department of Justice. 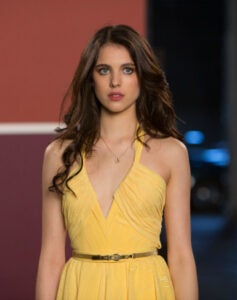 We come to learn that March has been drinking heavily since the recent death of his wife, thus putting his young daughter Holly (Angourie Rice, “Walking with Dinosaurs 3D”) in a caretaking position, even chauffeuring her frequently drunk dad around despite the fact that she’s years away from even having a learner’s permit.

It’s not always clear if “The Nice Guys” is commenting upon, or simply attempting to recreate, the nihilism and cynicism of 1970s movies, but when Holly watches a skin flick at a porn party (with that film’s female lead), or when innocent bystanders get gunned down and the film barely stops to notice, it pushes the film’s jocular brutality past the breaking point. Black actually did this sort of thing much better in his underappreciated “Kiss Kiss Bang Bang,” in which our heroes spend most of the film getting shot at (and occasionally shot); when the deaths were played for laughs, those characters were at least all villains, or villain-adjacent.

There are moments where you feel like Black and Bagarozzi are just ticking off period details they wanted to include (gas lines, Detroit muscle cars, “Smokey and the Bandit” billboards, discussion of killer bees), but at least the soundtrack offers a mix of John Ottman and David Buckley’s score meshed cleverly with plenty of Super Hits of the ’70s. Ultimately, it’s the comedic rapport between Gosling and Crowe that makes this enterprise work. We’ve seen Gosling do this sort of befuddled deadpan before, but you might have to go all the way back to 1994’s “The Sum of Us” to find a film in which Crowe allows himself to be this loose and funny.

Together, they’re an extra-violent, extra-id-driven Abbott and Costello or Laurel and Hardy, mixing wild verbal interplay with painfully hilarious physicality. Their breezy give-and-take goes a long way in elevating “The Nice Guys” above the moments where cynicism overwhelms the comedy. Elsewhere in the cast, Matt Bomer is clearly having a blast playing a creepy hitman with some very period-specific hair; keep an eye out for Yaya DaCosta, who steals several scenes as a nice girl who may or may not be a femme fatale.

If Black can iron out the tonal details, I’d love to see him reunite with this cast (and the skilled production team, led by cinematographer Philippe Rousselot) on some sequels: There’s a “Nice Guys 2” at the 1984 Summer Olympics just waiting to be tackled.