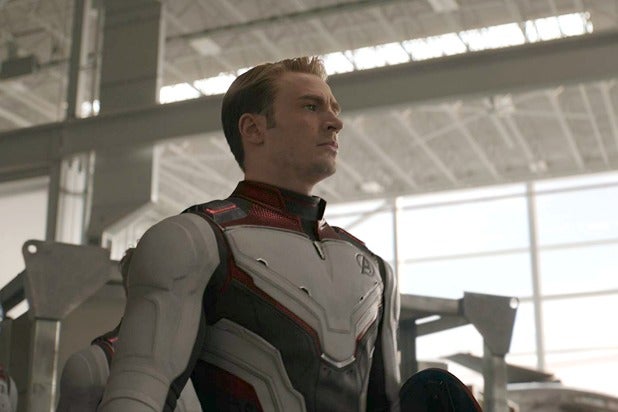 (This post contains most of the big spoilers for “Avengers: Endgame.” Just so you know.)

While most of the speculation and theories for what would happen in “Avengers: Endgame” were proven extremely wrong when we finally got to see the movie, but at least one major item that we all suspected would be included — based on a certain leaked set photo — turned out to be spot on.

That item? Time travel. A brand new concept for the Marvel Cinematic Universe.

The second act of “Avengers: Endgame” consists of the remaining Avengers — Captain America (Chris Evans), Iron Man (Robert Downey Jr), Hulk (Mark Ruffalo), Black Widow (Scarlett Johansson), Hawkeye (Jeremy Renner) and Ant-Man (Paul Rudd), along with an assist from Nebula (Karen Gillan) — going on a “time heist” to steal all the Infinity Stones from the past.

Time travel is always a real can of worms as a plot element because logically it doesn’t really make sense in real world terms. And since time travel is not real, each time travel story has to sort of lay out its own sort of mechanics for how time travel works and whether you can go back in time and change things or whatever.

The time travel rules of “Avengers: Endgame” are laid out briefly in a couple scenes, first with Professor Hulk and then by the Ancient One (Tilda Swinton) when Hulk visits her to collect the Time Stone in 2012. The rules are very, very vague, so you have to kind of read into them to make them make sense, but they go like so.

First, we get Hulk explaining that you can’t travel to the past and mess things up in order to change the future you just came from. He describes that in a fit of dialogue that’s intended as a kind of joking gobbledygook that’s supposed to make you laugh, but that’s the jist of it. The present is going to stay the same regardless of what kind of shenanigans they get into in the past.

The Ancient One, meanwhile, elaborates on all this by doing a magical version of the illustration Doc Brown draws of branching timelines in “Back to the Future Part II,” and explains to Hulk that she can’t give him the Time Stone because then this new timeline she lives in will suffer because she doesn’t have it. As we know from “Doctor Strange,” without the Time Stone, Dormammu will take over the universe if Strange doesn’t have the Time Stone.

Hulk is able to reassure her by saying the plan is to bring all the stones back to where they took them from — and that Doctor Strange deemed it necessary to put the present day Avengers in the bad situation they’re in. But the key is the promise that they’ll return all the stones. This is important moral and time travel issue — they’re not really saving the world if they’re doing so at the expense of a parallel universe, and presumably by returning the stones they can preserve the timelines as they were.

What all this means, logically, is that when the Avengers travel to the past, they are either 1) traveling to an alternate universe past that is so similar as to be broadly indistinguishable to them, or 2) traveling to their own universe’s past but creating an alternate timeline by inserting themselves into it in this way. The difference between those two options is immaterial since “Endgame” does not dwell on its mechanics all that much, so it doesn’t super matter which one it is.

What it also means is that there are no time loops here. When we watch the time travel scenes we are not viewing actions that were taking place in the background of the original “Avengers” film or “Guardians of the Galaxy.” They are literally creating new versions of these events. Obviously, Thanos did not, during the first “Guardians” movie, take all his forces into the future and get them all killed, because if he had then “Infinity War” would not have happened.

Unfortunately, the movie plays fast and loose with these rules. They are definitely changing the past in important, tangible ways beyond just taking the stones. Their actions in 2012 result in Loki escaping captivity after the Battle of New York with the Tesseract. In 2014, War Machine knocks out Peter Quill (Chris Pratt) when he’s on Morag to get the Power Stone — and with Star-Lord unconscious, Korath the Accuser would be able to retrieve the Power Stone for Ronan instead, which would in turn prevent the Guardians of the Galaxy from ever meeting each other.

And, of course, there’s the whole 2014 Thanos situation, which is certainly undoable — though that’s a change that would make that timeline a better place in theory. But then Ronan would be rampaging around the universe with the Power Stone without Thanos or the Guardians to keep him in check. Not to mention that without the Guardians, Ego the Living Planet (Kurt Russell) would have eventually destroyed the universe in that timeline.

And let’s not forget the 2014 version of Vormir. Red Skull referred to the sacrifice to obtain the Soul Stone as “everlasting,” so it’s not clear how it could even be returned. It does seem that since someone actually died to get that stone then it’s actually impossible to put it back as if it were never gone.

Since it’s difficult to imagine Captain America, on his own at the end of the movie, successfully undoing all the changes they previously made, I can’t help but assume they made divergent timelines anyway.

On top of all that, Steve inserting himself into the past and living out his life there would also create a divergent timeline, meaning he would not be able to appear in the present without intentionally traveling there using his time device, and there’s no indication in the movie that he did that instead of just living into the present day. So that whole thing doesn’t work with the set rules of “Avengers: Endgame” either.

Those complications are just things we’re gonna have to live with, though, because the movie is what it is. But hopefully reading this helped you get a better handle on all this craziness.