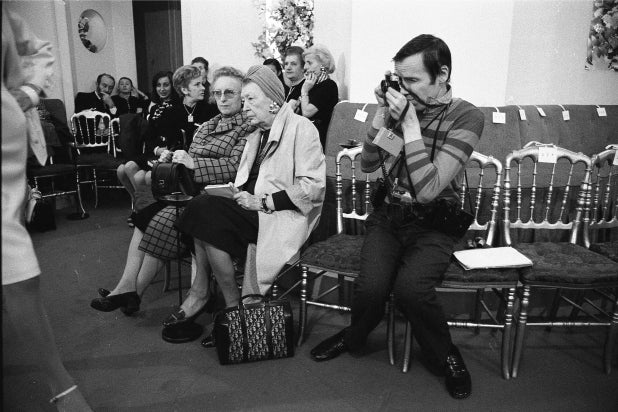 “The only way to last is never to let anyone really know you,” photographer Bill Cunningham wrote at the end of his memoir “Fashion Climbing,” published posthumously after his death in 2016. There was a documentary made about Cunningham in 2010 called “Bill Cunningham New York,” which followed him as he took street fashion photos for The New York Times, and now we get this new film from director Mark Bozek, which is centered on an interview Bozek did with Cunningham in 1994. Cunningham remains elusive in both of these films and in his book, and the reason for that feels fairly obvious.

Asked about romantic relationships in “Bill Cunningham New York,” Cunningham replied, “Do you want to know if I’m gay?” He deflected this question, saying it “never occurred to me.” In “The Times of Bill Cunningham,” he speaks briefly about his conservative upbringing in Boston and how his parents disapproved of his entering the fashion world as a young man. But in his memoir, he told a far more revealing story about the time his mother “beat the hell” out of him after she found him wearing his sister’s prettiest dress and she “threatened every bone in my uninhibited body if I wore girls’ clothes again.”

In the interview portions of “The Times of Bill Cunningham,” which take up most of its brief 74-minute running time, Cunningham addresses Bozek’s camera with a good cheer so insistent and so extreme that it feels “please like me!” protective. Though he was in his 60s when he did the interview in this movie, Cunningham still feels boyish — and there are a few photographs of him shown here as a younger man where he looks boyishly naughty — but this is only a hint of who he might have been.

The timeline here jumps all over the place, and the narration read by Sarah Jessica Parker can barely keep us apprised of where we are in Cunningham’s life. We are told about a photo he took of an elderly Greta Garbo on the street in 1978, which first made his name, and there is a brief, very jumbled section about his life in his small, crammed, monastic studio apartment in Carnegie Hall, where he lived for decades among celebrities and friends and shared a bathroom down the hall.

Cunningham was old-school Boston in many ways, and this includes traces of a Boston accent. He was very frugal and barely ever bought clothes for himself; he was obsessed about clothes on other people, mainly women. He is consistently and cheerfully dismissive of his work in this movie, calling himself a “zero” and wondering why Bozek is wasting his time on him. “I have no talent,” he says toward the end of the film and calls himself “a lightweight.”

Also Read: Sundance 2020: Streamers Spent Big and Documentaries Are All the Rage

Cunningham took his Garbo photo not because he recognized her but because he was taken by the cut of the nutria coat she was wearing. When Bozek asks him about the film stars he knew, Cunningham is also dismissive, saying that only Gloria Swanson approached the style in life that she had on the screen. He was much more interested in society women like Babe Paley and what women like her were wearing; practically everything to him was clothes, at the highest level of style.

He made hats for a living in the 1950s until “hats were out” in the 1960s. During this period, he was residing with an uncle and aunt in Manhattan, but when it became clear to his family that he was going to continue to make his living in or around fashion, he had trouble with them, and he eventually moved in with his employers, Sophie Shonnard and Nona Parks, who ran a dressmaking establishment called Chez Ninon. (At one point, Cunningham says that Chez Ninon “discouraged” Elizabeth Taylor from wearing their clothes.)

Cunningham does not speak about the problems with his family in detail, preferring to enthuse very intensely on the life he found once he was given an inexpensive camera in 1967 and began becoming a “fashion historian” of the streets. But there comes a time during the interview when he is overcome with emotion as he talks about being shy; he hangs his head and waits for the emotion to pass.

Toward the end of this movie, Cunningham breaks down in tears twice. He speaks about the toll that AIDS has had on the life of the city, and he seems to want to speak more about this, but Bozek, in an attempt to be comforting, tells him he doesn’t need to continue. “The Times of Bill Cunningham” is more frustrating than Cunningham’s memoir and the earlier movie about him because it feels like he might want to talk somewhat more directly about his life experience, but the old-time prison of the closet is allowed to win out in the end, and what we’re left with here is choppy and insubstantial.

The Academy said that it will announce an opening date for its long-awaited, much-delayed Academy Museum of Motion Pictures “very, very soon.” (During the Oscars show, perhaps?) In the meantime, it invited the press to tour the building on Friday, where we saw a lot of almost-finished spaces that will eventually contain exhibits relating to film history. Here’s what it looks like now, along with some plans and renderings of what it will look like then.