“The View” host Joy Behar made a bold suggestion in Wednesday’s episode — people who watch Fox News should be paid to watch “The View,” along with CNN.

Earlier this week, a new study was released that indicated how viewers change their opinions on political issues based on what network they watch. In the study, some Fox News viewers were actually paid to watch CNN for seven hours a week during the month of September 2020. The control group continued to watch Fox News.

When the study ended, researchers found that the Fox-to-CNN group had different thoughts about several issues, including Biden’s handling of COVID, the results of the 2020 election, and racial issues — most of them improved. So, citing that data, Behar suggested that paying viewers isn’t necessarily a bad way to approach things. 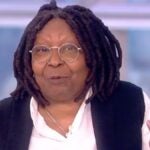 “You pay people to watch the truth, and they get smarter,” she said. “So maybe that’s the solution. Let’s just pay all these people who watch Fox to watch this show and CNN.”

But her co-host Sunny Hostin wasn’t as thrilled by that prospect, and quickly shut down the idea.

“That’s absurd,” Hostin shot back. “That’s just as absurd in my view as paying people to get a vaccine that’s gonna save their lives.”

Hostin was of course referring to some states, which incentivized residents to get vaccinated by offering them money, some places offering as much as $500.