“The Worst Ones” (“Les Pires”), a drama about four unruly French teenagers who are chosen to act in a film, has won the top prize in the Un Certain Regard section of this year’s Cannes Film Festival.

Acting prizes went to Vicky Krieps for “Corsage” and Adam Bessa for “Harka,” while the directing award went to Alexandru Belc for “Metronomes.”

Saim Sadiq’s “Joyland” won the Jury Prize, which made it runner-up to “The Worst Ones.” 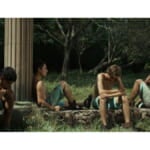 The Un Certain Regard section, which is typically devoted to smaller, more daring films than those in the main competition, consisted of 20 movies this year. Other entries in the section included Riley Keough and Gina Gammell’s “War Pony,” Davy Chou’s “Return to Seoul,” Maryam Touzani’s “The Blue Caftan,” Agnieszka Smocyznska’s “The Silent Twins” and Maksim Nakonechnyi’s “Butterfly Vision.”

The main Cannes awards, including the Palme d’Or, will be announced on Saturday.