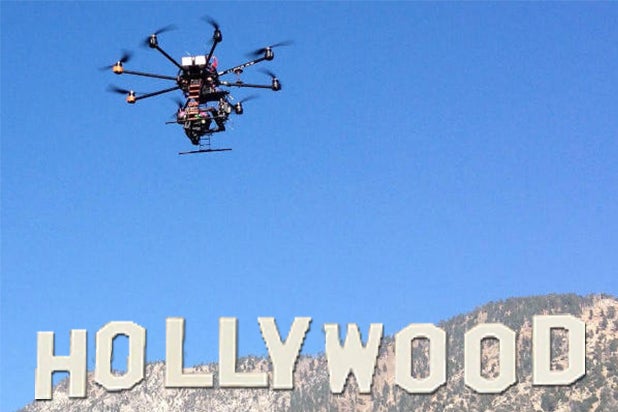 The drones, worth an estimated $600,000, were taken early Tuesday morning in a low-tech heist in which thieves used a rock to smash a glass door and a wheelbarrow to cart the custom-made gadgets away. In surveillance footage shown on Los Angeles television station KABC, a robber can be seen walking through the shattered door, then loading the wheelbarrow with drones.

The robbery occurred at 3:30 a.m., according to Corona Police Department spokesperson Sgt. Kim Velasco. The alarm system at PMG Multi-Rotors activated and police responded, but the thief was already gone when officers arrived.

Investigators believe one or two other people were involved in the crime. But the video quality was not high enough to get good images of the other suspects.

The drones, also called unmanned aerial vehicles, are valued at about $50,000 each.

A suspected thief is shown in a surveillance image taken at PMG Multi-Rotors (Credit: KABC)

This wasn’t the first time the 60,000-square foot building has been targeted. Six months ago someone smashed the side windows of the business and stole cameras and computers, and just two weeks ago stereo equipment was stolen from trucks parked at the site.

Drone use for commercial filming was just made legal in the United States in September.

Below is surveillance footage from the theft courtesy of KABC-TV.