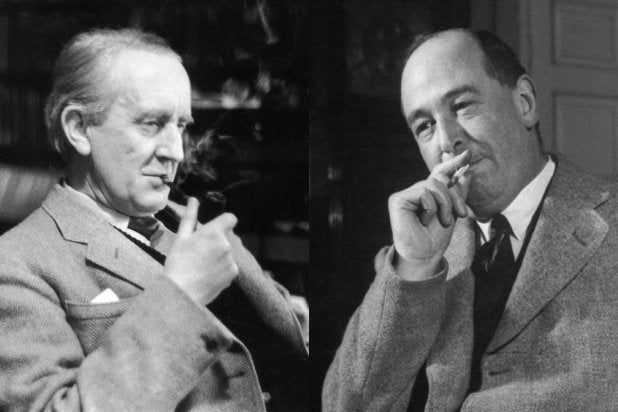 Growing up in England, I became a huge fan of the work of J.R.R. Tolkien and C.S. Lewis. I even recreated some scenes from “The Lion, the Witch and the Wardrobe” in an 8mm film I made as a teenager. The fact that the two most imaginative fantasy authors of the 20th century were friends was remarkable to me. I felt that their story had to be told — and not in a dry, dusty, academic way — but with as much wonder and excitement as their books contained.

The men were very different but shared many common experiences, not least the horror of World War I. They used their storytelling to exorcise demons, and for a while, their love of the ancient world and their religious faith bonded them. However, the tension that grew between them was as dramatic as any of their novels, and their struggle to complete the books that made them world-famous equally suspenseful. This film is a character study of two great creative minds but also a visual roller-coaster ride for the audience.

The authors’ emotional journey is the backbone of the film, and the predictable version would be the classic stuffy English period drama that’s been seen so many times before. I will take the opposite route. I intend to use extensive computer-generated visual effects, imaginative “in-camera” devices and a contemporary style of filmmaking to bring this story alive in the most exciting way. Regardless of whether you’ve heard of these men or read their books, the film will be an exhilarating and moving experience for any age.

One of the most interesting aspects of this story is how the writers’ lives start in a certain relationship to each other, then end somewhere quite different. When we join the story, Tolkien is a lively, confident man. He’s surrounded by his loving family, successful in his work as an Oxford professor and already established as the author of “The Hobbit.” His life seems perfect.

Meanwhile, Lewis is struggling. He hasn’t made professorship at Oxford, maybe because of his unorthodox relationship with the mother of his deceased best friend. Was it sexual or a bizarre mother complex? He was considered an outsider by the Oxford establishment. Born in Northern Ireland, Lewis lost his mother at an early age and was ignored by his father. Sent to boarding schools and frustrated in his academic ambitions, he wasn’t yet a successful writer — and certainly not compared to Tolkien. Lewis had been a strict Atheist for many years, but Tolkien helped him regain his faith, and out of that came their friendship.

Tolkien’s son goes off to fight in World War II, which brings up Tolkien’s own traumatic memories of war. This inevitably leads to writer’s block, and he can’t finish his latest book, “The Lord Of The Rings.” Lewis, however, is recruited by the BBC to give inspirational broadcasts to the nation and becomes something of a celebrity. Their relationship is further soured when Lewis quickly finishes his book “The Chronicles of Narnia,” encroaching on what Tolkien regarded as his stylistic territory.

The dynamic between these two great minds is fascinating and heart-rending. They were once such good friends and supporters of each other. In the end, perhaps they were just too similar and there was one too many alphas in the pack.

Simon West, is a British born film director. His films include "Con Air," "The General's Daughter," and "Lara Croft: Tomb Raider" starring Nicholas Cage, John Travolta and Angelina Jolie, respectively. West is the only live action director ever whose first three 3 films all grossed over $100 million at the U.S. box office. West also served as an executive producer on the Oscar nominated "Black Hawk Down." His TV production company has spawned Fox’s “Keen Eddie”, CBS' “Close to Home”, Fox’s “Human Target” and NBC's “The Cape." West directed the remake of “The Mechanic” starring Jason Statham and Ben Foster and recently “The Expendables 2."