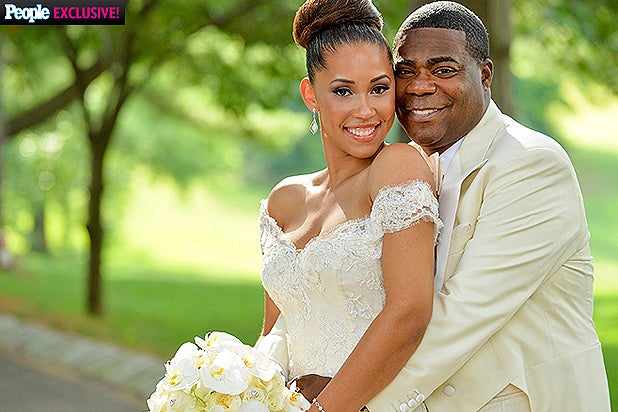 After a difficult year, Tracy Morgan is smiling again.

The comedian and former “30 Rock” star is shown beaming while holding his new wife, Megan Wollover, in a photo People published on Thursday.

The two exchanged vows on Sunday in front of 150 guests at The Ashford Estate in Allentown, New Jersey.

Wollover wore a stunning off-the-shoulder Ines Di Santo custom gown and had her hair styled in a bun. Morgan donned an off-white tux.

Just before the bride made her grand entrance, a family member carried the couple’s two-year-old daughter Maven Sonae down the aisle with a sign saying “Daddy, here comes Mommy!”

Morgan was severely injured in an accident on the New Jersey Turnpike in June 2014, when a Walmart truck driven by Kevin Roper struck a limo carrying the comedian and several others.

In addition to Morgan’s injuries, the crash killed comedian James McNair. Walmart and Morgan settled a lawsuit in May. In March, the mega-corporation agreed to pay McNair’s family $10 million in a separate settlement.

Since the crash, the “Saturday Night Live” alum has been making steady progress, and he is set to host the long-running NBC sketch series on Oct. 17.