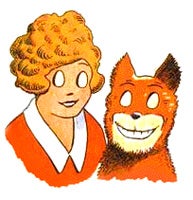 The Tribune Company is killing "Annie."

The last panel of the iconic comic strip will be printed on June 13, the company said. The future of “Annie” – like everything else – appears to be online.

"Annie is definitely not dying," Tribune Media Services vice president Steve Tippie told the Chicago Tribune. “[Annie] will definitely have a life beyond this newspaper incarnation. …The daily newspaper strip will go away. Now, that doesn’t mean that Annie won’t come back … whether it’s (in) comic books, graphic novels, in print, electronic. It’s just too rich a vein (not) to mine."

Tippie continued: "’Annie’ is more of a kids’ property, so it’s less relevant to newspaper audiences than say a ‘Dick Tracy’ or a ‘Brenda Starr.’ It’s much easier for kids to get their comics fixes on television or on the Internet. … Comic books and graphic novels still have huge audiences in print form."

The Chicago Tribune killed "Annie" off in 1992.

The strip currently runs in less than 20 newspapers, including the Daily News.