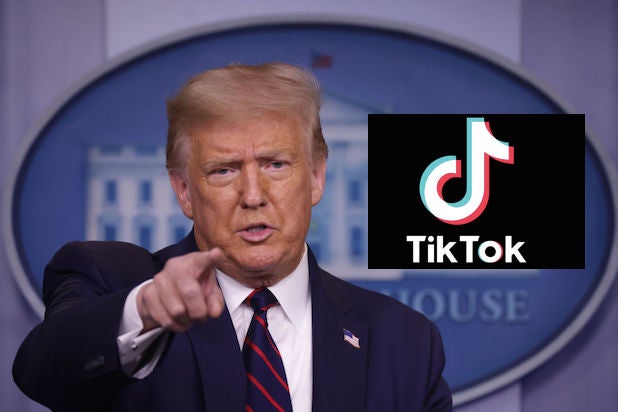 President Donald Trump is preparing to sign an order demanding Bytedance, the Beijing-based parent company of TikTok, divest its ownership of the wildly popular app, according to Bloomberg on Friday.

The decision comes after TikTok has been scrutinized over the last year by both U.S. lawmakers and regulators, who have questioned whether the app poses a national security threat due to its data collection practices and close ties to the Chinese government.

Microsoft has emerged as a potential TikTok buyer, with Fox Business Network’s Charles Gasparino reporting Friday the tech giant was “in talks” to buy the app.

“While we do not comment on rumors or speculation, we are confident in the long-term success of TikTok,” a rep for TikTok told TheWrap. “Hundreds of millions of people come to TikTok for entertainment and connection, including our community of creators and artists who are building livelihoods from the platform. We’re motivated by their passion and creativity, and committed to protecting their privacy and safety as we continue working to bring joy to families and meaningful careers to those who create on our platform.”

Even before Friday’s reports, TikTok has found itself in D.C.’s crosshairs.  Earlier this week, President Trump said he was “looking at” taking action against TikTok; it was unclear if the president meant banning TikTok. In the same way, India recently banned TikTok and several other Chinese apps. Presumptive Democratic nominee Joe Biden also banned his staffers from using TikTok on both their personal and work devices on Tuesday.

Bytedance bought Musical.ly, another popular lip-syncing app, in late 2017. Bytedance later merged the app with TikTok, its homegrown app allowing users to create short videos set to music. TikTok has since become one of the most popular apps in the world, boasting more than 800 million users and regularly sitting atop Apple and Google’s app store rankings.

Despite TikTok’s popularity, critics have grown increasingly concerned the app doubles as a data collection tool for China’s communist government. TikTok has denied ever sharing user data with Chinese authorities. But Stratechery’s Ben Thompson recently pointed out TikTok’s privacy policy explicitly says it “may share” user information “with a parent, subsidiary, or other affiliate of our corporate group,” which, based on how companies operate in China, means data can be sent to authorities.

Thompson explained further: “It is important to note, this would be the case even if the privacy policy were not so honest. All Chinese Internet companies are compelled by the country’s National Intelligence Law to turn over any and all data that the government demands, and that power is not limited by China’s borders. Moreover, this requisition of data is not subject to warrants or courts, as is the case with U.S. government requests for data from Facebook or any other entity.”