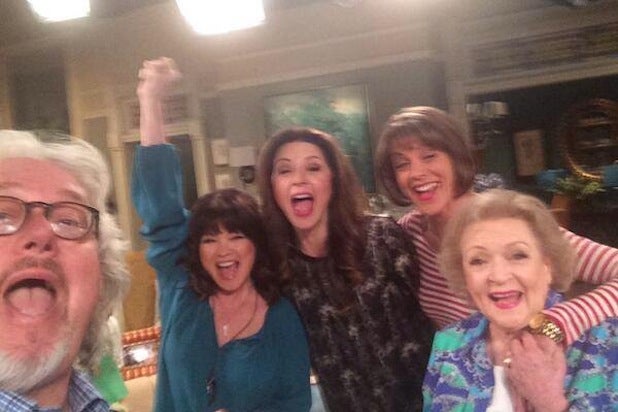 TV Land has delivered an early renewal to comedy “Hot in Cleveland” for a 24-episode sixth season.

The show broke the news on its official Facebook page along with a photo of the cast celebrating during the rehearsal for the show’s upcoming 100th episode. See the photo above.

The renewal arrives as the series is currently airing its fifth season, which began in March, and shows that its ratings thus far has given TV Land the confidence of renewing it this early in the season. “Hot in Cleveland” is averaging 2.6 million total viewers.

The comedy follows three has-been entertainment industry veterans, played by Valerie Bertinelli, Jane Leeves, and Wendie Malick, who move from Los Angeles to Cleveland, Ohio, where they end up leasing a home with its caretaker, played by Betty White.

Created by Suzanne Martin, “Hot in Cleveland” is executive-produced by Martin, Sean Hayes and Todd Milliner, through their production companies SamJen Productions and Hazy Mills Productions. The concept behind the show is based on an original idea by Lynda Obst, who serves as executive producer.