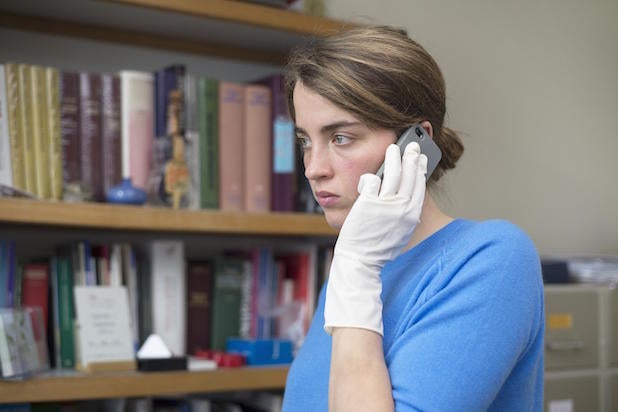 The most unusual murder mystery at Cannes played out on Wednesday morning in the Grand Theatre Lumiere, as Jean-Pierre and Luc Dardennes’ “The Unknown Girl” had its first screenings in competition.

The Dardenne brothers aren’t known for things like murders and mysteries — instead, their cinema has long been based on an understated naturalism, evoking working-class lives with little fanfare but intense empathy.

They’ve been to Cannes many times before, and won the Palme d’Or for “Rosetta” in 1999 and “L’Enfant” in 2005; “The Unknown Girl” has the potential to make them the first three-time Palme winners.

Based on Wednesday’s screenings, they’re probably longshots to achieve that trifecta. “The Unknown Girl” is an affecting character study absolutely in line with much of their work, and its unadorned look at a young doctor wracked with guilt over a murder she thinks she could have prevented is quietly compelling. If the murder-mystery aspect seems a bit routine and is solved too tidily and coincidentally, it’s also almost beside the point; mood and character, not plot details, are central to the success of a Dardenne brothers movie.

Adèle Haenel stars as Jenny, a capable, driven and somewhat curt young physician on the verge of taking a job at a clinic that will advance her career. An hour after closing one night, she opts not to answer when someone rings the bell to get into the clinic; the next day, she learns that the late-night caller was a young woman whose body was found nearby, dead and without identification.

Jenny becomes obsessed with finding out who the dead girl is, and particularly with giving a name to the woman whose death haunts her. The rest of the film follows her quest, which results in lots of stonewalling, a few threats and a string of revelations that may or may not lessen the burden Jenny and other characters feel over the death.

As usual with the Dardennes, the action plays out in front of hand-held cameras with natural light and no musical score; there’s real artistry (and of course a little artifice) in making it look so simple and unadorned.

Haenel is touching as the troubled young woman — and as a relatively unknown actress, her presence puts “The Unknown Girl” back in more traditional Dardenne territory than their last Cannes entry, “Two Days, One Night.”

That 2014 film was an anomaly for them in that it featured an actual movie star, Marion Cotillard, in the lead role. There was nothing flashy or starry in Cotillard’s urgent but resolutely understated performance; she fit in well with the Dardennes’ usual approach, which is to use unknowns and develop the characters over an extensive rehearsal process.

But Haenel, surrounded by many Dardenne regulars, is a more typical leading character, even if the film itself is perhaps not as memorable as “Two Days.”

“We try to film life,” said Luc Dardenne at a Cannes press conference following the screening. The achievement of “The Unknown Girl” is that even when it involves a murder mystery, it still feels like life.