Vanessa Bryant, the wife of late NBA all-timer Kobe Bryant and mother of their deceased daughter Gianna Bryant, has some words for rapper Meek Mill over his “extremely insensitive” lyrics about the January 2020 Calabasas helicopter crash that claimed both members of her family.

“Dear @meekmill,” Bryant wrote in an Instagram story late Monday night. “I find this line to be extremely insensitive. Period. I am not familiar with any of your music, but I believe you can do better than this.”

“If you are a fan, fine, there’s a better way to show your admiration for my husband,” she continued. “This lacks respect and tact.”

“And if I ever lack I’m going out with my choppa/it be another Kobe,” Meek Mill spit on a recent collaboration with Lil Baby.

A snippet of the song, including those words, made its way to social media last week. Vanessa Bryant posted the lyrics in question, as well as their preceding, rhyming line at the top of her Instagram Stories statement.

Meek Mill says he has privately apologized to (presumably) Vanessa Bryant: “I apologized to her in private earlier today not to the public,” he wrote on Twitter. “Nothing I say on my page directed to a internet viral moment or the family of a grieving woman! If you care about someone grieving change the subject!”

Kobe, Gianna, and seven others were killed in the crash on Jan. 26, 2020. The group was on their way to basketball practice at Kobe Bryant’s Mamba Academy in nearby Thousand Oaks.

Earlier this month, federal safety officials said the pilot flying Kobe Bryant’s helicopter violated federal standards by flying through clouds, likely making him disoriented right before crashing into a hillside near Calabasas, California. During a virtual meeting earlier this month, the National Transportation Safety Board said “spatial disorientation” is what likely led to pilot Ara Zobayan crashing. Zobayan was “flying under flight orders, or VFR, which legally prohibit him from penetrating the clouds,” according to NTSB Chairman Robert Sumwalt, but the pilot continued to fly into clouds. The agency last June said Zobayan told air traffic controllers his helicopter was climbing above heavy clouds when it was actually descending rapidly.

Click here to find out how the rest of the internet reacted to Mill’s lyrics. It was pretty much in line with Vanessa’s feelings. 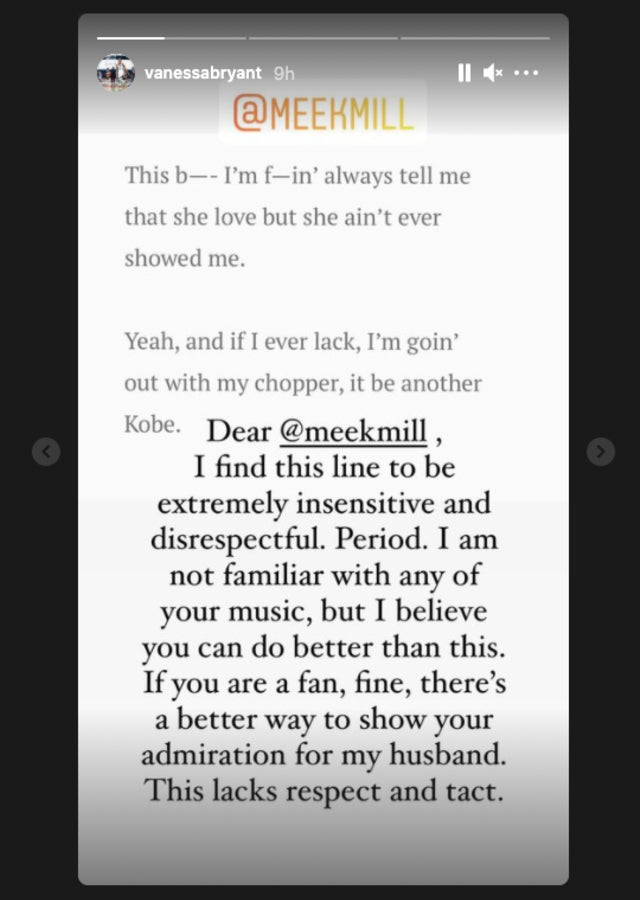