Viacom's logo on the iconography of a dollar bill

Amid all the executive drama, Viacom beat its (lowered) fiscal fourth-quarter 2016 earnings target, but the company still missed on revenue expectations.

That’s largely because its box office was down 55 percent versus the comparable quarter last year, when Paramount Pictures had “Mission: Impossible – Rogue Nation” in theaters. The company’s Filmed Entertainment segment took a $137 million operating loss over these measured 90 days. On the small-screen side of the business, lower TV ratings dropped advertising sales at Viacom’s Media Networks segment by 8 percent.

Wall Street had forecast quarterly earnings per share (EPS) of 65 cents on $3.3 billion revenue, per a Yahoo Finance-compiled consensus. Viacom actually reported 69 cents in earnings on $3.2 billion in revenue.

For the full year, Viacom’s revenue slipped 6 percent and its various non-GAAP adjusted income and earnings measurements were all down 30 percent or more.

“Viacom ended the 2016 fiscal year well into our transition, as the company’s industry-leading data program increased in size and sophistication, ratings stabilized at several of our key networks and Paramount has begun to rebuild a full, dynamic slate of films,” interim president and CEO Tom Dooley said in the media release. “In addition, our international media networks business is stronger than ever, and we will continue to broaden our footprint and apply our successful strategies to additional territories in attractive markets.”

He concluded his prepared, written remarks: “With new leadership across the company, continued investments in new content, technologies and targeted acquisitions, and an expanded Board of Directors, I have great confidence in Viacom’s next phase, as the company explores the exciting possibilities ahead.”

Viacom could use a strong next phase — this last one was been rough. Not only is VIAB’s stock down over the past two-years-plus, but the company is just about on its third CEO in about as many months.

Since then, Dooley has already come and (essentially) gone in the interim post — he’s technically leaving on the 15th. Then, Robert Bakish will occupy the top job.

The Redstones and National Amusements are pushing for struggling Viacom and the stronger CBS to re-merge. The companies are obeying orders and have formed committees to explore the notion.

Viacom executives will host a conference call at 8:30 a.m. ET to discuss the financial results further.

Here’s VIAB stock from the past 12 months: 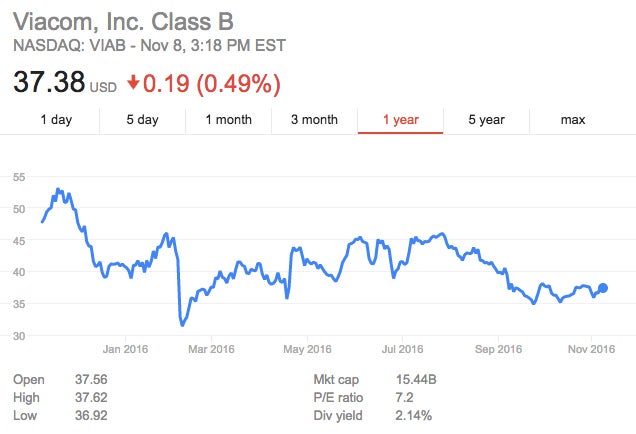