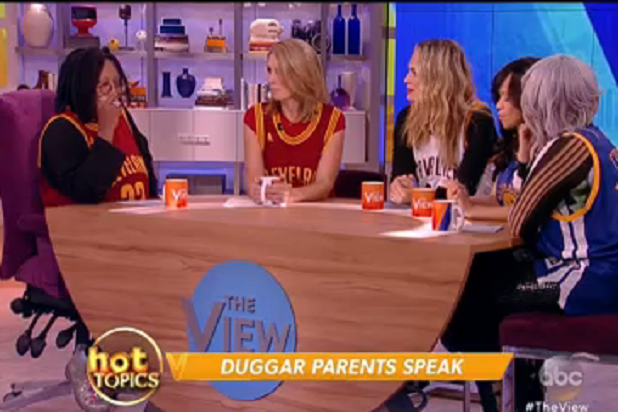 Megyn Kelly’s interview with “19 Kids and Counting” stars Jim Bob and Michelle Duggar — who are currently embroiled in a child-molestation scandal revolving around their son Josh — dominated the Hot Topics segment of “The View” on Thursday, with Whoopi Goldberg and Nicolle Wallace blasting the family’s double standards on forgiveness.

“You brought God up, so it makes it OK to say this,” Goldberg asserted. “You’re not forgiving of people who feel differently than you … so if you want to find out about forgiveness, I don’t think that this is the way to do it.”

Goldberg continued, “I know this is your son and I know that you’re trying, and this was many years ago. But don’t downplay this, especially after what you guys have done in the name of Christianity and God to other people.”

See video: 'The View's' Nicolle Wallace Rips Duggar Family: 'We Hold Up and Celebrate These People Who Don't Protect Their Kids'

“My point is, don’t play the Christian card like that … don’t bring up God,” Goldberg later said. “God made all of us, and God doesn’t make mistakes.”

Nicolle Wallace also chimed in on the topic, blasting the family’s double standards.

“This is the trap in politics; it’s hypocrisy,” Wallace said. “When you say. ‘God will forgive my son who molested my daughter,’ if that’s your worldview, if that’s how you got through it, OK. But then you can’t say that God can’t forgive a transgender person.”

Rosie Perez offered her sympathy for the victims, who have been identified through the leak and publicizing of the scandal even though they were minors at the time.

“Those girls got re-victimized all over again,” Perez lamented.

Later on during the episode, the “View” crew discussed a report stating that, during a recent test, 95 percent of TSA agents were unable to detect planted weapons and fake explosives.

See video: Jessa Duggar Confirms She Was Molested by Brother Josh: 'I Was One of the Victims'

“They find every sippy cup,” Wallace marveled. “They can’t find the bombs, but they got the sippy cup.”

That conversation then evolved into a discussion of gun ownership in America.

“The showdown is coming, this discussion of guns and such and liberty. And I have to say if we follow the law as written, it doesn’t mention anything about AK-47s, but it does mention, what is it called? The musket,” Goldberg, who noted that she owns a gun, offered. “So if you gotta have a gun because you gotta follow what the law says and all the [amendments], then get your behind a musket. Then nobody will complain.”