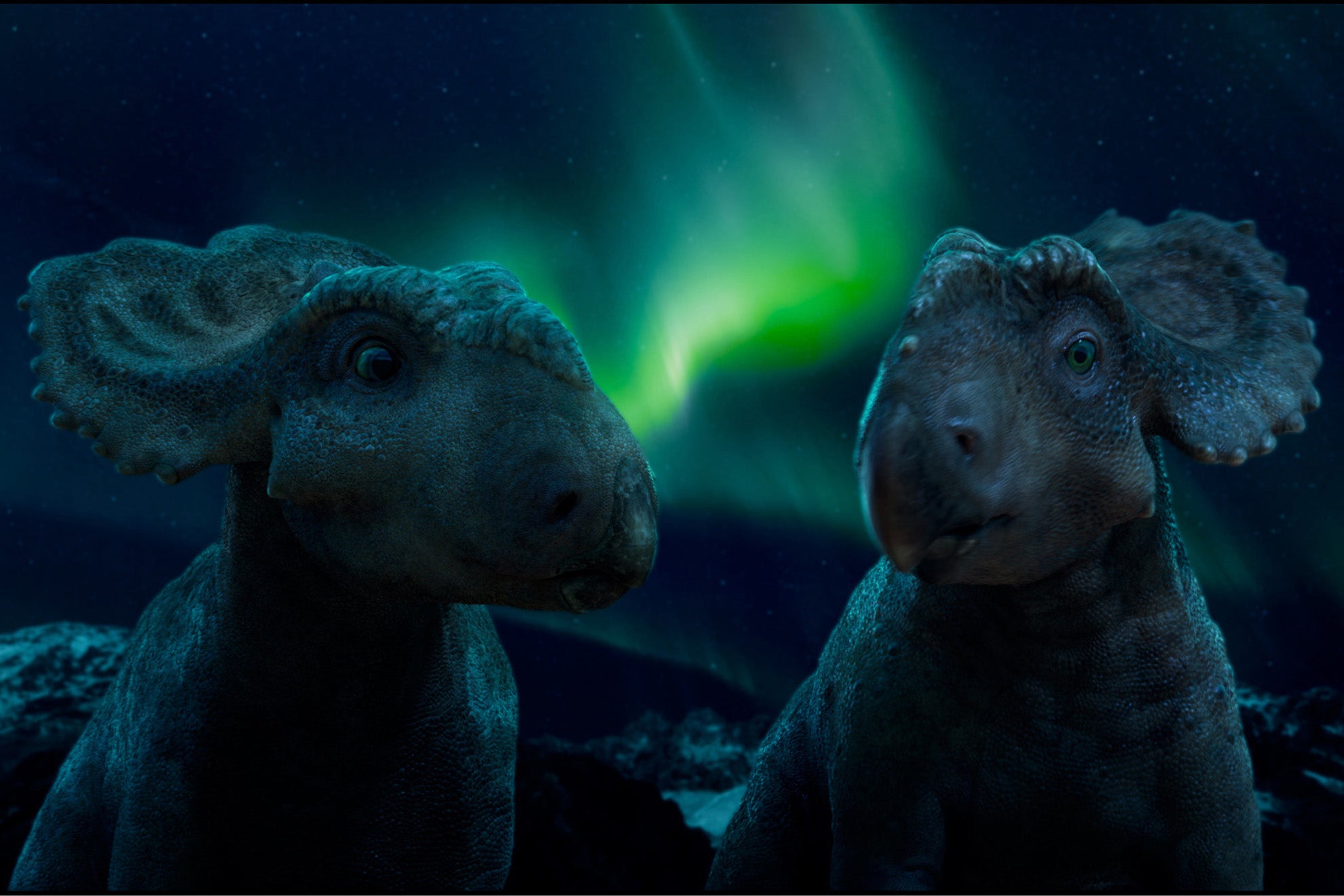 rumping that film in 1999, and on the small screen even, with the documentary miniseries “Walking With Dinosaurs,” BBC Earth decided to follow in Disney’s footsteps – including the missteps – with “Walking With Dinosaurs 3D,” an insufferable family adventure whose impressive animation is consistently undercut by cartoonish self-awareness.

Bookended by the contemporary story of a teenager named Ricky (Charlie Rowe), who thinks science is for losers, the film stars John Leguizamo (“Kick-Ass 2,” the “Ice Age” series) as Alex, a prehistoric parrot who tells the story behind a gorgosaurus tooth given to Ricky by his paleontologist uncle, Zack (Karl Urban). Alex explains that the tooth was knocked out by Patchi (Justin Long), the runt of a litter of pachyrhinosauri, who comes of age during his family’s annual migration ritual.

Struggling to assert himself beneath the dominant influence of his alpha-male brother Scowler (Skyler Stone), Patchi falls in love with a fellow pachyrhinosaurus named Juniper (Tiya Sircar) as he learns about the bigger challenges of the world around him. But when the herd is threatened by a gorgosaurus determined to turn their migration into a buffet, Patchi is torn between staying loyal to his brother and exploring his own burgeoning leadership skills.

The decision to use a framing device for this story is both crass and condescending, suggesting that “kids today” couldn’t possibly think paleontology is cool, and then assuming that their version of what dinosaurs probably went through is awesome enough to sway even the most disaffected teenager. In spite of the kid’s “too cool for fossils” disposition, Urban does his best to make the job look compelling, but he’s hopelessly outclassed by the dinosaurs, who get about 20 times as much screen time as he does.

As superfluous as that framing device is, however, it at least provides a respite from the dopey voice acting that Leguizamo and Long bring to these prehistoric characters. Spouting clunky dialogue about alpha males and laws of nature in between freeze-frame title cards announcing the species of each new dinosaur, the “name” actors and their costars avoid anything resembling nuance or dimensionality, even as writer John Collee (“Happy Feet”) confuses Darwinian principles with character loglines.

As pathologically annoying as Leguizamo can be, Long is by far the worst offender, if only because his scrappy delivery is never ingratiating, always irritating. But given conflicts that would feel clichéd to kindergarteners, the inevitability of a happy ending seems even more imminent than the extinction of dinosaurs, and as a consequence, there’s no one for whom to root or about whom to care. (It definitely doesn’t help that there are about five poop jokes within the first 15 minutes of the film, either.)

Ultimately, other than a few moments of unexpectedly brutal violence, “Walking With Dinosaurs” just coasts inexorably towards a dead end – not so much for the characters as the audience’s interest level.