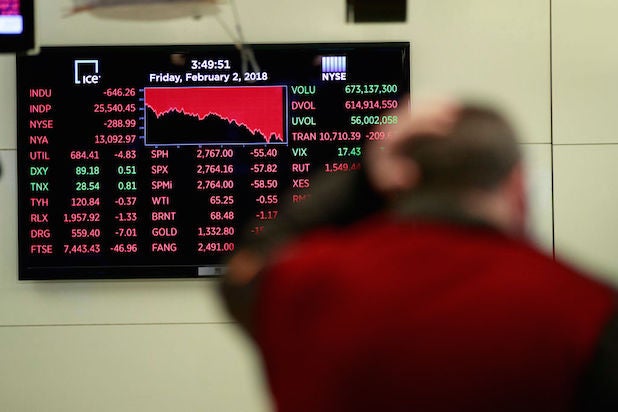 It was a brutal day on Wall Street on Thursday, with the three major indices — the S&P 500, Dow Jones and Nasdaq — all suffering their worst single-day percentage declines in months. A number of high-profile tech and media companies, including Facebook and Netflix, weren’t spared from the wreckage.

From an entertainment standpoint, Disney shares slumped 1.6%, Live Nation fell 3.11% and AMC Theatres dropped about 6% to $6.60 per share AT&T, the parent company of WarnerMedia, dropped “only” 0.37% on the day.

It’s unclear what the driving factor or factors were behind the sell-off, although growing tensions between the U.S. and China could be playing a key role.

“Although there is no single driver for the weakness, it seems as if investors all of a sudden realized how overbought stocks are and sold. Someone yelled fire in a crowded theater and everyone left at once,” Ryan Detrick, chief market strategist for LPL Financial, told CNN on Thursday.

Another explanation could be simply that investors are taking some money off the table after the market has been on a major bull run. In particular, the Nasdaq has been on a tear of late, darting up from about 6,900 points in March to 11,458 at the close on Thursday. A day earlier, The S&P 500 reached a record-high,while the Dow hovered near its own record high heading into Thursday — a fact President Trump boasted about on Twitter.

Despite Thursday’s blood bath, it’s worth pointing out all three of the major indexes aren’t close to the depths they sunk to in March, as the COVID-19 pandemic hit the U.S.