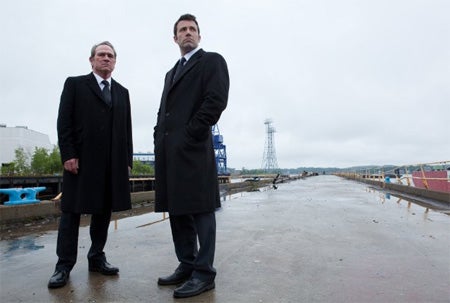 The Weinstein Company has acquired the rights to “The Company Men.”

The film – which premiered at Sundance in January — stars Ben Affleck, Chris Cooper, Kevin Costern and Tommy Lee Jones. It was written and directed by John Wells — his first feature-length.

The Weinsteins plan to release the film later this year.

The deal – said to be in the “mid seven figures” — was brokered by David Glasser and Peter Lawson of The Weinstein Company and CAA, which also set up financing.

The story of "Men" centers on Bobby Walker (Affleck) “who is living the American dream: great job, beautiful family, shiny Porsche in the garage. When corporate downsizing leaves him and co-workers Phil Woodward (Cooper) and Gene McClary (Lee Jones) jobless, the three men are forced to re-define their lives as men, husbands, and fathers.”

Weinstein produced “Good Will Hunting,” which launched the careers of Affleck and Matt Damon.