There are two ways to explain what exactly a video game is: the easy, simple way, and the really complex way.

The easy answer is that a video game is interactive digital entertainment that you “play” via a computer, a game console (like the Xbox or PlayStation) or a phone or tablet. There, you can go home now because class is over and we’re done. That really does sum it all up — but it’s not a very good explanation o 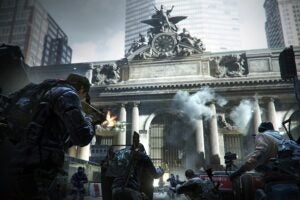 f everything going on here.

As the new person covering video games for TheWrap, I aim to provide good explanations for you, our readers. So I’m going to dive into the more complicated explanation here.

The label “video game” casts an absurdly large net over a whole lot of different things. There are a million different kinds of video games, and each of them sorta functions as its own form of entertainment media. Since we don’t have concrete labels for all those individual types — just loose genre descriptions — we just say everything is a video game. It’s confusing, even to those of us you’d call gamers.

If a person were to somehow grow up only on video games and then discover later in life all the other forms of entertainment we regularly consume, that person would probably be confused as to why we consider film and television distinct types of media. Compared to the scope of everything that counts as video games, movies and TV are indistinguishable from each other.

Video games are sports that take place in a computer. They’re interactive TV shows and interactive movies. They’re digital board games and card games. They’re rough simulations of everyday life including, probably, whatever you do for a living. Some video games are works of artistic expression. Others don’t know what artistic expression is or why you would care about whatever that is.

But they’re all video games.

The “game” part has been a sticking point in recent years in endless online debates about whether this thing that is definitely interactive entertainment but has no skill component is truly a video game. Whatever the flavor of the week in that argument is, of course, it’s definitely a video game, because if “World of Warcraft” and “NBA 2K” and “League of Legends” and “The Last Of Us” and “Farming Simulator” and “Super Mario Bros” and “Candy Crush Saga” are all video games, then “Firewatch,” in which you walk around a forest clicking on stuff until the plot progresses, is also a video game.

None of those things are really like any of the others. But that doesn’t matter because everything counts.

Even within a single video game there is very often more than one kind of video game. The annual “Call of Duty” series, which does have a meaningful cultural footprint, has both a linear, story-focused portion that you play alone and context-free competitive multiplayer. They often also include a third cooperative mode about fighting zombies or aliens. These are all considered the same genre of video game, but they’re really separate products that appeal to distinct types of players.

I like storytelling art, so each year when I play the new “Call of Duty” I gravitate toward the story mode and don’t pay so much attention to the multiplayer stuff, which is not art and has no aspiration toward being art. But the art portion and the not-art portion still combine to make a single game.

“NBA 2K,” also an annual franchise, is even more fractured than “Call of Duty”, with modes where you just play basketball, a team management simulation and even a collectible card game in there, and most players pick one mode and stick with it.

There is a weird sort of solidarity in throwing every bit of interactive digital entertainment under that one umbrella. “Everybody’s a gamer,” people say, because it is true that most people in the Western world have played something that counts as a video game recently. So somebody who has never played anything except “Puzzle & Dragons” on their phone counts as a gamer.

We consequently get to live under the delusion that “Uncharted,” a franchise that carries plenty of cachet among the core gaming audience, has some kind of greater cultural relevance even though only a few million people have played those games. It’s validation for a real time sink of a hobby that is still predominantly restricted to the domain of us nerds, which is why I wrote this explainer.

I’m going through all this now because it demonstrates the difficulty in sifting through all this stuff. I’ve done it for a living for years and it’s still not easy for me — for regular folks, it’s just too much. But that’s why I’m here. I’m Phil, I’m covering video gaming for TheWrap, and we’ll get through this.