If you thought that becoming a father and moving to the suburbs would make Joe Goldberg less of a creepy stalker, well, you just haven’t been paying attention. Netflix released the first full-length trailer for “You” Season 3 on Friday and Penn Badgley’s narration reveals the same violent, compulsive murderer we’ve come to know and love — only now with a lawn.

“We’re just the nice, normal neighbors next door,” Joe tells his new wife Love (Victoria Pedretti) in the clip, convincing no one.

The new season picks up right where Season 2 left off nearly two years ago, with Joe and Love having relocated from Los Angeles to “the balmy Northern California enclave of Madre Linda, where they’re surrounded by privileged tech entrepreneurs, judgmental mommy bloggers and Insta-famous biohackers.” Whether or not Joe will hate them as much as he hated L.A.’s social-climbing influencers and the self-serious elitists of New York’s literary scene is still undetermined (but almost certainly yes, he will). 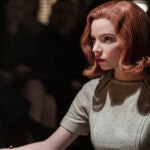 The trailer also reveals that the object of Joe’s obsession has once again shifted, and his narration is now directed at his infant son, Henry, instead of Love: “For you, I’d marry the monster,” he says.

Per Netflix, “Joe is committed to his new role as a husband and dad, but fears Love’s lethal impulsiveness. And then there’s his heart. Could the woman he’s been searching for all this time live right next door? Breaking out of a cage in a basement is one thing. But the prison of a picture-perfect marriage to a woman who’s wise to your tricks? Well, that’ll prove a much more complicated escape.”