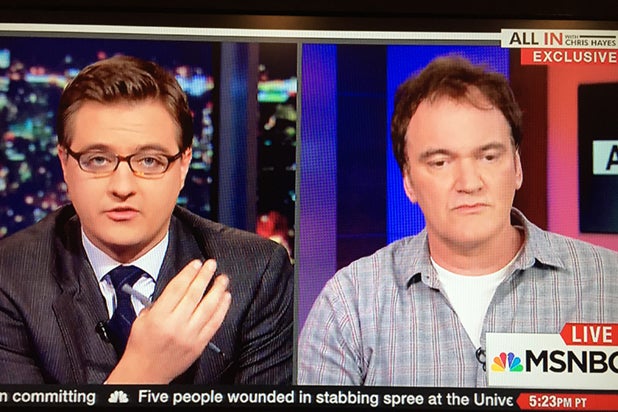 Quentin Tarantino, under fire for his remarks against police brutality, said police officers should “stop shooting unarmed people,” in an interview Wednesday on MSNBC ‘s ““

The director of “The Hateful Eight” also took on the police unions, which have launched a boycott against the upcoming film, saying:

“They want to slander me and imply I’m saying things I didn’t say. The reason is because they want me to shut up… It’s much easier to feign outrage and start arguments with celebrities than deal with the fact that the citizenry has lost trust in them.”

He added: “They’re calling for a boycott and maybe it will happen, maybe it won’t.”

Photos: 7 Times Quentin Tarantino's Mouth Got Him in Trouble (Photos)

“I’m sure the company that is producing the movie, it’s a pain in the butt for them. At the same time the company released the movie ‘Fruitvale Station,'” the director said, referring to 2013 film “Fruitvale,” which was inspired by the shooting death of Oscar Grant by a BART transit police officer in Oakland, California.

Tarantino went on to explain why he attended the Oct. 24, rally in Manhattan.

“I was happy to show up,” the Oscar winner said as he revealed that he was invited to take part in the gathering because of past statements about what he described as “white supremacy in this country.”

He then railed against the killings of African-Americans and Latinos by police officers. “What we were doing there was — there’s a lot of statistics going on, a lot of people who were once living and breathing and now are dead. It was time to tell their stories about what happened.”

He maintained that “just because I was at an anti-police brutality protest doesn’t mean I’m anti-police.”

Tarantino broke his silence a day earlier with an interview in the L.A. Times. “All cops are not murderers,” he said. “I never said that. I never even implied that.”

Watch video of the interview of Tarantino on MSNBC here.