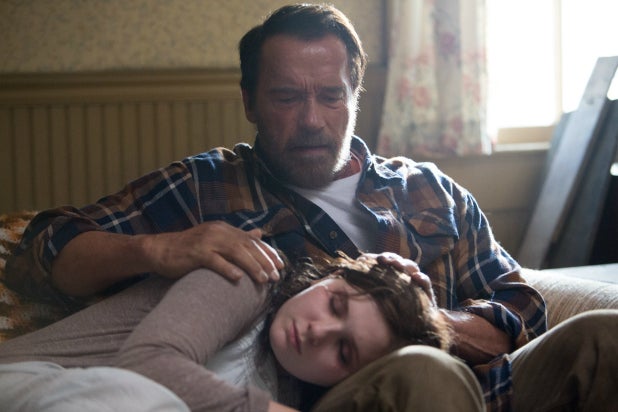 A zombie movie starring Arnold Schwarzenegger sounds like it should be campy fun, but first-time director Henry Hobson’s “Maggie” is grimly one-note, a small mood piece and character study that relies heavily on its three main actors: Schwarzenegger, Abigail Breslin and Joely Richardson.

Most zombie movies are allegories about something or other, and while “Maggie” certainly seems self-serious enough to be in that category, it becomes clear as it goes on that it has no larger social or political point to make. Schwarzenegger’s Wade is a simple farming man who in the opening scenes is searching for his daughter Maggie (Breslin), a girl who has been infected with a virus; she is one of many victims of a viral epidemic that changes its carriers into zombie-like creatures within six to eight weeks.

Hobson makes creepy, evocative use of deserted locations and consumer detritus as Wade picks Maggie up from a hospital to take her home. Many parents and family members have been leaving their infected loved ones in quarantine, where it is said that patients slowly begin to eat each other, but Wade won’t have that. He loves his daughter and will do anything to protect her.

A stop at a gas station puts father Wade in the line of a zombie attack, and Schwarzenegger deals with a viciously snarling former gas employee single-handedly and handily. This brief fight scene seems to portend bigger and worse attacks to come, but surprisingly enough it remains the only real attack from a zombie in the film. Once Wade and Maggie return to their family farm, where she greets somewhat cold stepmother Caroline (Richardson), Hobson keeps his camera close on the three of them as Maggie starts to rot slowly from within. The director over-relies on a stylistic tic, in which he crams his characters in the extreme right of his widescreen frame, seemingly aiming for a sense of claustrophobia and physical isolation that only looks, finally, like the last resort of a director pressed for time and budget.

Schwarzenegger is hardly the figure of paternal gravitas that he needs to be here, even with a few days’ stubble on his face. He was always more of an icon than an actor, of course, and Hobson handles him carefully, giving him only a few lines of dialogue at a time and sometimes filming him in silhouette or from a distance.

Audiences tend to giggle at Schwarzenegger and expect him to announce his lines in that way he used to in his action movie heyday, and he does that only once here, when Wade heartily and insincerely compliments his wife’s cooking: “Caroline, this food is delicious!” he crows.

Schwarzenegger has a kind of flash-card approach to emotion, selecting one at a time and doing it as big as possible; his emotional resources are very meager. (In one mid-film close-up, Schwarzenegger ekes out what is surely the tiniest tear ever shed.) He is inadequate for a small genre piece like this, and so little happens during the course of “Maggie” that you are left to wonder just how this large Austrian guy came to be running a farm in the Midwest with his very patrician-looking wife.

Perhaps to make up for Schwarzenegger’s stolidity, Breslin weeps and weeps some more as her eyes go all zombie pale and her left arm rots away, so that she has to finally chop off a finger and send it discreetly down the garbage disposal. There’s a little romance for Breslin’s Maggie with an incipient zombie boy, but this subplot, like so much else here, has little resonance.

If you’ve always wanted to see a movie where Schwarzenegger watches his daughter waste away with a pained expression on his face, you’re in luck with “Maggie,” which isn’t able to do much more than that. “Maggie” is somewhat in the style and mode of Rian Johnson‘s “Looper,” which is superior in plot conception, character, and budget — and budget is really the issue here. This is a calling card movie for Hobson, and he shows enough skill and visual technique with what he has been given in “Maggie” to suggest that he is capable of taking on a larger project with a better script, more money, and a more expressive actor at its center.