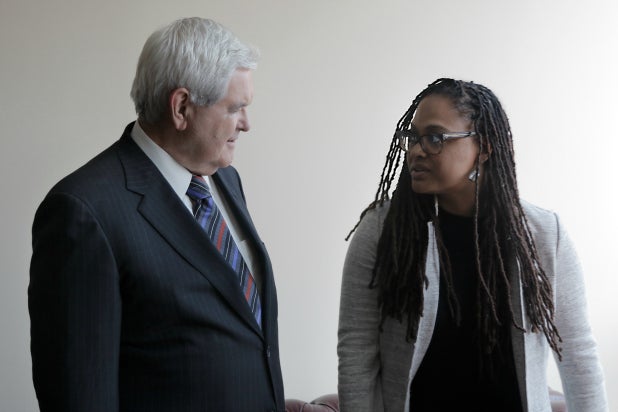 D.W. Griffith’s “Birth of a Nation” is Richard Nixon’s law-and-order candidacy is Ronald Reagan’s War on Drugs is Donald Trump’s law-and-order candidacy. That’s the throughline that director Ava DuVernay so effectively draws in “13th,” a damning exploration of the history of black oppression in the United States. It’s a film that hits hard, but it also nails its targets with precision.

The 13th Amendment, from which the film draws its title, freed the slaves, but it also offered a loophole: “Neither slavery nor involuntary servitude, except as a punishment for crime whereof the party shall have been duly convicted, shall exist within the United States,” reads Section 1, and DuVernay makes the case that a de facto slavery has continued in this country via the systematic criminalization of black men.

It’s an argument presented by an impressive array of talking heads, but DuVernay throws in mixed media and animation to make the proceedings anything but a dry discourse. We see clips from the original “Birth of a Nation,” the notorious film that not only created much of what we consider the language of cinema but also proclaimed the Ku Klux Klan as heroes while depicting freed slaves as lazy, duplicitous, homicidal rapists.

That movie came out in 1915, following decades in which black men in Reconstruction-era America got thrown onto chain gangs for minor offenses like loitering — or got lynched for equally specious reasons. As the decades pass, we see the constant criminalization of black men as a means to deprive them of their rights. “13th” reminds us that Martin Luther King, now ensconced in bipartisan historical warm-and-fuzzies, was a radical activist, denounced as a liar by FBI chief J. Edgar Hoover. (Gallup polls note that MLK currently makes the “Most Admired” list, but in 1966, he had a 63 percent disapproval rating.)

Once we reach the latter half of the 20th century, we get the Southern Strategy (which race-baited Southern whites into becoming Republicans), followed by Nixon’s tough talk on crime, and the movie shows how incarceration rates grow and grow and grow, particularly once Reagan enters office. Rest assured, both political parties get a grilling here: After the Willie Horton ad takes down Dukakis, Bill Clinton establishes himself as a tough-on-crime Democrat, establishing the three-strikes laws and the 1994 Crime Bill that put even more black men behind bars. (And yes, Hillary Clinton’s “superpredator” clip pops up, as well.)  President Clinton, to his credit, is shown apologizing for it after the fact, and Newt Gingrich, of all people, decries the disparity of sentencing for crack dealers (mostly black men) versus those trafficking in powdered cocaine (mostly white men).

Whether “13th” is covering material you already know well or revealing facts that are new, DuVernay keeps the momentum going, looping in relevant songs by Nina Simone and Public Enemy while tapping figures like Angela Davis for powerful first-person testimony. By the time she reaches the brutal footage of the murders of Tamir Rice and Philando Castile — which she has placed into context with the discussion of the militarization of even small-town police forces — the film has accrued an undeniable power. DuVernay isn’t interested in the impossible, and often absurd, goal of “balance,” despite the squirrely presence of Grover Norquist and a lobbyist-apologist; she wants to make you feel something. And she succeeds.

“13th” — the first non-fiction film ever to screen in the New York Film Festival’s Opening Night slot — is an all-too-timely gut-punch of a documentary. It names the right names and connects the right dots, and it comes at a time when, sadly, this country needs exactly this kind of call to action.

The fifth season of “American Horror Story,” “Ferris Bueller’s Day Off” and a YouTube star’s new scripted series are among the streaming platform’s October offerings

From an R&B-singing vampire queen and George Clooney to an '80s truant teenager and a YouTube star, there are plenty of streaming options throughout the month.