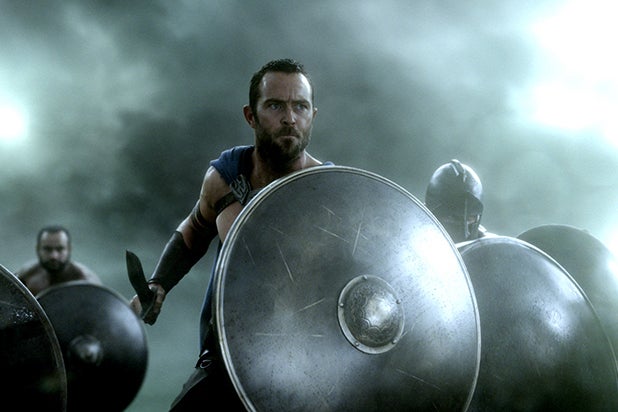 Although it probably works just as well as its 2006 predecessor, “300: Rise of An Empire” seems a lot siller than “300,” perhaps because it takes itself a lot more seriously.

Working from a script by the original “300” team of Frank Miller, Kurt Johnstad and Zack Snyder, director Noam Murro (“Smart People”) inherits the first film’s gold-dipped, speed-ramped camerawork and its penchant for heroic largesse. But “Rise of an Empire” lacks director Snyder’s shrewd deconstruction of cartoonish hagiography, undermining the glorious, robust escapism of testosterone-fueled historical reenactment with an underdog story that feels almost too reflective to be rousing.

Taking place concurrently with the first film, “Rise of an Empire” stars Sullivan Stapleton (TV’s “Strike Back”) as Themistocles, an Athenian general who resorts to battling Xerxes (Rodrigo Santoro) and his conquering Persian armies only after exhausting all efforts to unite Greece as a democratic nation. Refused help from Sparta by Queen Gorgo (Lena Headey), Themistocles assembles a small army of free men and employs naval strategy to impede the Persians from striking land.

But after finding his ranks decimated by the sheer volume of forces being controlled by Queen Artemisia (Eva Green), Persia’s most formidable general, Themistocles begins to reconsider the actual cost to his men – and to his country — of pursuing a so-called noble death.

The great thing about the first film is that it never lets you forget you’re hearing a story – a kind of übermensch myth-making that excites soldiers and inspires nationalism regardless of the odds that are being faced.

Indeed, it’s only because of the fire in the few survivors’ bellies at the end of the first “300” that the film feels remotely like a triumph: sure, 299 of their best men got slaughtered, but now their lesser-trained backups are super pissed-off, readying themselves to fight and, if necessary, to die in defense of their country. As told by Dilios (David Wenham), the term “dramatic license” doesn’t begin to cover the level of hyperbole he applies to King Leonidas’ defense of Sparta.

But even if the events of “Rise of an Empire” take place at virtually the same time as those in “300,” they’re being regaled to audiences seven years later — and to present them with a similar kind of propagandistic zeal might seem irresponsible given the seemingly inexhaustible supply of America’s real-world conflicts. As such, Murro presents Themistocles’ wartime position as a counterpoint to Leonidas’, as he champions democratic ideals, agonizes over the prospect of sending free men to war, and sees little glory in their deaths.

Oddly, the very respectability of that narrative choice tends to undermine the gritty enjoyment of watching people get dismembered in spectacular slow motion. When we’re meant to, like, care about the fact that these people are human, it’s not as fun.

That said, Murro hasn’t turned fans’ beloved “300” into some kind of solemn eulogy for antiquity’s lost soldiers; far from it. In fact, he matches Snyder’s sense of bloody camp blow for cringe-inducing blow, expanding the first film’s meat-and-potatoes combination of sex and violence into a full-blown smorgasboard, thanks to an ass-kicking centerpiece sex scene between Themistocles and Artemisia that’s sort of hilariously “empowering” as a portrait of two equals competing to show who possesses more testosterone.

But the broader edges of Snyder’s tale, which was populated by giants, monsters and mystics, have been pared away to focus on the mettle of “real” men making the ultimate sacrifice, as awesomely as humanly possible, on behalf of their country.

For better or for worse, Stapleton is a star in the same way that Gerard Butler was one when he starred in “300,” and it remains to be seen whether Hollywood figures out how best to utilize him elsewhere. But he’s a formidable presence on screen, and there’s an appealing consciousness behind his eyes that elevates him above the ranks of the industry’s aspiring action heroes; he’s a next-gen Russell Crowe without quite the same depths of simmering intensity.

Otherwise, “Rise of an Empire” is all Eva Green’s show, and she clearly relishes the opportunity to not only match but exceed her male counterparts’ supposedly indefatigable toughness. Though Green sees more action in this film than Headey’s Queen Gorgo did in “300,” the earlier heroine offered a promising template for female leadership, commanding respect while always remembering her place in this man’s world. But Green demolishes the era’s gender dynamics with a performance that plays like an act of revenge upon all of the b.s. love-interest roles she’s ever been offered.

That Artemisia is Themistocles’ story-assigned opponent offers a welcome change in action-movie formula; that Green makes her a convincing adversary (physically as well as emotionally) is a testament to the actress’ talent and commitment.

Meanwhile, Murro’s only crime is failing to show any hint of directorial authorship; his considerable control of the form and structure of the narrative notwithstanding, it’s unclear what ideas or message he wants to impose upon material Snyder made his own. But given that the movie’s priority as a whole seems to be to replicate the style and impact of its predecessor, his imprint might simply be fidelity.

In that regard he’s entirely successful, which is why “300: Rise of an Empire” is a worthy companion piece to the first film; even though its message may emphatically support democracy, its director seems to be a puppet installed by a dictator.