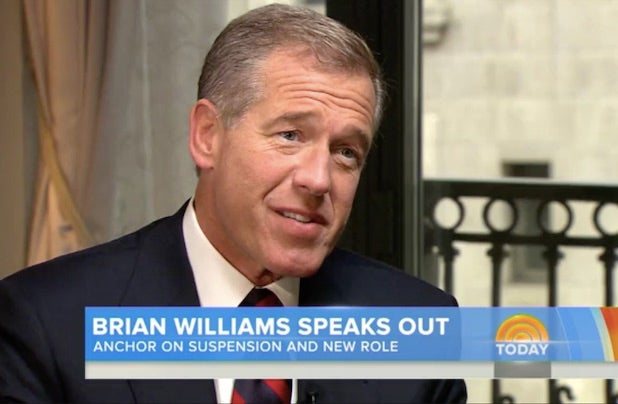 Brian Williams‘ interview with Matt Lauer Friday has lit the media world on fire, as social media and journalists have both been reacting to the disgraced anchor’s somewhat evasive interview.

Pressed by Lauer on whether he intentionally lied about past reporting, Williams vehemently denied doing so, instead saying his ego made him say things that weren’t true. He also didn’t elaborate on other specific stories he exaggerated on.

Here are the top 5 head scratchers from the Williams confessional.

1. Brian’s “Black Box”
“I have discovered a lot of things, I have been listening to and watching what amounts to the black box recordings from my career, I’ve gone back through everything, basically 20 years of public utterances.”

Williams’ used a poorly worded pun for an airplane GPS tracker to shed light on potential other red flags he might’ve found regarding inaccurate statements he’s made.

Ultimately, he didn’t answer if he’s found other inconsistencies–nor what they specifically where.

2. Brian’s “Bad Place”
According to Williams, his exaggerations were not intentional lies, but the manifestations of internal demons which compelled him to create fiction.

“It came from a bad place, it came from a sloppy choice of words; I told stories that were not true, over the years looking back, it is very clear I never intended to. It got mixed up, it got turned around in my mind.”

Lauer pressed back a little on this, saying Williams’ explanation will still make people skeptical on whether he knowingly lied.

“I see why people would say that, I understand that…this was clearly ego-driven, a desire to better my role in a story I was already in,” Williams rationalized.

3. Road Trip
“Going forward, there are going to be different rules of the road…I am different as a result, and I expect to be held to a different standard.”

Williams said he has gone back in his mind and identified inaccuracies in his reporting: “What has happened in the past has been identified and torn apart by me and has been fixed, has been dealt with,” he said.

On what exactly he identified and tore apart, we don’t know: Lauer didn’t press him on the matter. As far as Williams’ having different rules on the road, one would have to imagine MSNBC will have additional eyes on his reporting in real-time.

4. “True Lies”
“I told the story correctly for years before I told it incorrectly,” he said about the Iraqi helicopter story that sparked the initial scandal. “I was not trying to mislead people–that to me is a huge difference here.”

Williams added he did not knowingly go on “Nightly News” and tell a story he knew was a lie.

It seems Williams believes his errors are less egregious because they weren’t uttered right away–a distinction that will surely anger journalists who see no distinction.

5. What Other Stories?
When pressed by Williams on whether there are other stories he’d like to reveal he exaggerated on, Williams gave a non-answer.

Lauer followed up on whether he’d like to reveal what those stories he got wrong were–Williams didn’t get specific, concluding: “I am sorry for what happened here. I am different as a result and I expect to be held to a different standard.”