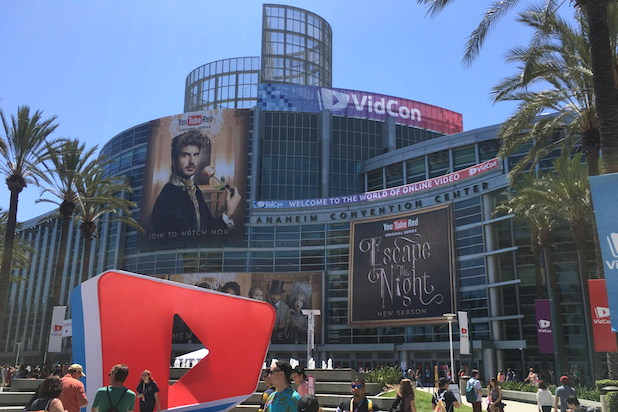 You can learn a lot walking around VidCon — the premiere online video conference — and that’s exactly what I’ve done the last three days at the Anaheim Convention Center in California.

It’s an in-person opportunity to see the rapid shift in content from traditional mediums to digital outlets. This isn’t a convention for those on the periphery of entertainment — VidCon now represents the mainstream.

With that in mind, here’s what I’ve learned after talking to YouTube creators, Instagram influencers, industry suits, and bobbing-and-weaving through hoards of teenagers.

Also Read: Creators Have Made YouTube Into a 21st Century Lecture Hall

1. Traditional TV is for old peopleWe touched on this trend from day one of VidCon, but the data continued to back it up: kids aren’t watching traditional TV anymore. Of the countless teenagers TheWrap talked to at VidCon, not one could name a show they wait to watch each week on TV. Instead, they all talked about subscription streaming being their channels-of-choice: Netflix, Hulu, HBO Now and YouTube Red. The only thing bringing kids back to TV is live sports, and with digital platforms now looking to shell out for sports, it’s only moving in the wrong direction for cable providers.

2. YouTube Isn’t Slowing Down
YouTube CEO Susan Wojcicki listed several impressive stats for the convention’s title sponsor during her keynote address — that it has 1.5 billion global users logging in each month, and that users spend on average an hour each day on its platform. It’s live streaming platform, YouTube TV, is also expanding to 15 markets from the initial five cities it launched with earlier this year. And along with a collection of (small) feature updates, the main takeaway was YouTube continues to invest heavily in virtual reality, announcing an easier way for creators to make 180-degree VR content.

3. Advertisers See the Writing on the Wall
Gen Z’s move towards subscription and online content is not only an issue for traditional TV, but also advertisers. Kids aren’t used to sitting through several minutes of commercials anymore. Ad-blockers are now commonplace. As one 17-year-old attendee told TheWrap, “I can’t even remember the last time I saw an ad [on video content].” It’s put an increased pressure on brands to latch onto digital “influencers,” who are now the taste-makers for teenagers.

And the lack of ad-exposure has bled over to more than TV. Michal Blicharz, Vice President of ESL, an e-sports company that organizes competitions worldwide, said brands are now looking to “embed themselves into content” (think ad placements within games) to reach an audience.

4. Kids LOVE Their Favorite Creators
I didn’t get to experience BeatleMania, but watching young girls chase after their favorite YouTube creator can’t be far off. Seeing a team of teenage girls run with Usain Bolt-like speed to circle the star of “Exploring with Josh” was eye-catching to say the least — you would’ve thought they’d spotted Rihanna. At one point, one performer with millions of YouTube subscribers told TheWrap she was waiting as long as possible to walk outside because she knew it would be “absolutely crazy.”

5. Kids Want to be Creators
And at the same time, the barriers to entry are incredibly low for teenagers looking to mimic their idols. This became obvious at VidCon. Similar to only needing a ball and a basket to practice jumpers like Golden State Warriors sharpshooter Stephen Curry, fans need little more than their iPhone to imitate their favorite YouTubers. The lasting image that’ll be burned into my mind of VidCon will be the droves of teenagers walking and talking to their phones, with one arm extended to record their latest adventure. The new wave of YouTube influencers is already on its way.