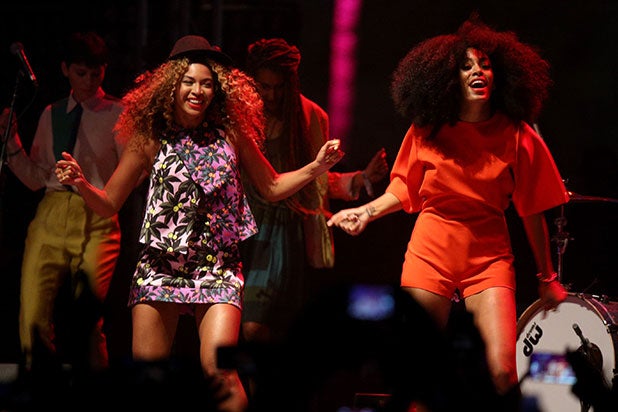 Everyone, stop what you are doing — Beyonce Knowles interviewed her sister, Solange Knowles.

The sis-to-sis interview covered the younger Knowles’ new album, “A Seat at the Table,” which debuted last September.

The Interview magazine piece delved deep into the inspiration for Solange’s songs, which range from her incredibly famous sister to the real estate boom in Miami. The interview also revealed that Solange would lock herself into her room to play drums and write songs when she was just a kid, in a neighborhood that produced Scarface, Debbie Allen and Phylicia Rashad.

Solange also writes her own lyrics, co-produces her own tracks, stages all of her performances, and comes up with all of her own choreography, the interview revealed, all while raising her son Julez (whom she had at the age of 17 with her former husband Daniel Smith) with her new husband, Alan Ferguson.

And if you ever wondered what kind of sister Beyonce is, read on. See below for the seven highlights from Beyonce’s interview with her sister, Solange.

1. Solange played music and wrote songs when she was young

At the very beginning of the interview, Beyonce said, “Growing up, you were always attracted to the most interesting fashion, music, and art. You were obsessed with Alanis Morissette and Minnie Riperton and mixing prints with your clothes … when you were only 10 years old. You would lock yourself in a room with your drum set and a record player and write songs.”

2. Solange is proud of her childhood neighborhood

“We grew up in the same neighborhood that produced Scarface, Debbie Allen, and Phylicia Rashad,” she said. “So, culturally, it was as rich as it gets. People were warm. People were friendly. But the biggest thing that I took from it is the storytelling. I feel like, in the South in general, but specifically in our world growing up, people were expressive and vivid storytellers. In the hair salon or in the line at the grocery store; there was never a dull moment. I feel so happy that I got to grow up in a place where you could be the pastor’s wife, you could be a lawyer, you could be a stripper on the side, you could be a schoolteacher–we saw every kind of woman connect on one common experience, which was that everyone wanted to be great and everyone wanted to do better. And we really became womanist because of that. And that’s the thing that I carry with me the most, being able to go out into the world and connect with women of all kinds.”

3. Solange has to fight against sounding “arrogant” when she says she’s written every song on her album

Beyonce asked her sister, “What are some misconceptions about being a strong woman?”

Solange responded, “One thing that I constantly have to fight against is not feeling arrogant when I say I wrote every lyric on this album. I still have not been able to say that. That’s the first time I’ve actually ever said it, because of the challenges that we go through when we celebrate our work and our achievements. I remember Björk saying that she felt like, no matter what stage in her career, if a man is credited on something that she’s done, he’s going to get the credit for it. And, unfortunately, that still rings true. It’s something I’ve learned so much about from you, getting to be in control of your own narrative. And, at this point, it should be an expectation, not something that you’re asking permission for. I feel like I’m getting closer to that, not taking on all the baggage when I have to just stand up for myself and say, ‘No, I’m uncomfortable with that.’ And I really appreciate you and mom being examples of that, being able to speak about our achievements, these things that deserve to be celebrated, without feeling bashful about it. “

4. Solange would freak out if she ever met Diana Ross

Beyonce reminisced of a moment when she introduced her sister to Nas, which made Solange cry and act like “a fool.” The only other person that would evoke a similar reaction from Solange, she said, would be Diana Ross.

“I broke out in some hives when I went to her concert,” Solange explained. “Alan was like, ‘Uh, you’re breaking out into hives. Calm down.'”

5. Beyonce did a “kicka– job” of being Solange’s sister

“You did a kicka– job,” she told Beyonce. “You were the most patient, loving, wonderful sister ever. In the 30 years that we’ve been together, I think we’ve only really, like, butted heads … we can count on one hand. “

6. Solange is a multi-tasker

Solange responded that she gets a lot of her inspiration from society’s labels and from her sister.

“Growing up in a household with a master class such as yourself definitely didn’t hurt,” she said. “And, as far back as I can remember, our mother always taught us to be in control of our voice and our bodies and our work, and she showed us that through her example. If she conjured up an idea, there was not one element of that idea that she was not going to have her hand in. She was not going to hand that over to someone. And I think it’s been an interesting thing to navigate, especially watching you do the same in all aspects of your work: Society labels that a control freak, an obsessive woman, or someone who has an inability to trust her team or to empower other people to do the work, which is completely untrue. There’s no way to succeed without having a team and all of the moving parts that help bring it into life. But I do have–and I’m unafraid to say it–a very distinctive, clear vision of how I want to present myself and my body and my voice and my perspective. And who better to really tell that story than yourself.”

7. Solange wrote a song about the real estate boom in Miami

Beyonce asked her sister where the title for one of her tracks, “Cranes in the Sky,” came from. Solange explained that she wrote the song eight years ago, when she was just coming out of her relationship with her son’s father, who she had been with since Junior High, causing a difficult transition period in her identity.

“I used to write and record a lot in Miami during that time, when there was a real estate boom in America, and developers were developing all of this new property,” she added. “There was a new condo going up every ten feet. You recorded a lot there as well, and I think we experienced Miami as a place of refuge and peace. We weren’t out there wilin’ out and partying. I remember looking up and seeing all of these cranes in the sky. They were so heavy and such an eyesore, and not what I identified with peace and refuge. I remember thinking of it as an analogy for my transition–this idea of building up, up, up that was going on in our country at the time, all of this excessive building, and not really dealing with what was in front of us. And we all know how that ended. That crashed and burned. It was a catastrophe. And that line came to me because it felt so indicative of what was going on in my life as well. And, eight years later, it’s really interesting that now, here we are again, not seeing what’s happening in our country, not wanting to put into perspective all of these ugly things that are staring us in the face.”