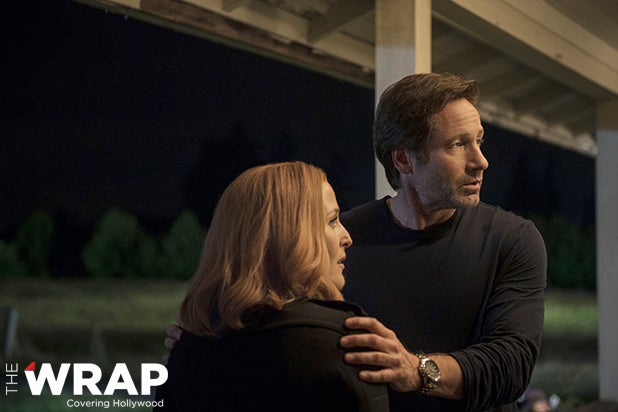 “The X-Files” event series premiered on Sunday night and some fans could hardly wait to take to social media to share their love for the show.

Many praised the show for retaining its original opening title sequence, as well as the hot-as-ever chemistry between FBI Agents Fox Mulder (David Duchovny) and Dana Scully (Gillian Anderson).

Read below for other reasons fans want to believe that this new “X-Files” will measure up to the original.

1. Old Intro Is the Best Intro

Many fans on Twitter and reddit were ecstatic that the show retained the opening title sequence from the original series. What better way to tap into that nostalgia factor than show Mulder and Scully from yesteryear?

“I Screamed with joy,” one redditor wrote. “I don’t even have more than a few years and 4 Seasons worth of ‘X-Files’ under my belt and it still made me feel nostalgic.”

2. Mulder and Scully Still Got It

Some fans think that the chemistry between Mulder and Scully has aged like a fine wine — or an alien conspiracy that has been fermenting since the cover-up at Roswell.

The series will feature appearances by original series actors like Annabeth Gish and William B. Davis, but Mitch Pileggi was getting all kinds of love on social media during the premiere.

The premiere episode introduced a brand-new alien conspiracy for Mulder and Scully to unravel, and some were happy that the series’ long running undercurrent got an update.

“[This] episode provided a new take on the alien conspiracy(For the X Files at least) and it was a good middle ground for Long time and First time viewers,” one redditor said.

While fans of a show are never without their criticisms, many “X-Files” true believers seemed willing to overlook what they saw as flaws and to give the new event series a chance.

“[Willing] to give ‘X-Files’ a chance and THEN [sic] express happiness or sadness. It’s TELEVISION [sic] for goodness sakes,” one Twitter user said.

9 'X-Files' Episodes That Blew Us Away (Photos)

See which episodes of the hit paranormal drama made us laugh, cry and cringe

"Pilot Episode" Season 1, Episode 1: We got our first look at FBI Agents Fox "Spooky" Mulder and Dana Scully, who return to Fox soon, in the 1993 debut of the hit paranormal drama