And with that, apple.com was practically down. (Paramount won’t let us embed the video yet, hence the screen-shots. Click here for a direct link to the trailer itself.) 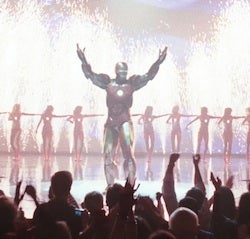 Once things smoothed out at the site, here’s what fanboys the world over were able to glean from the two-and-a-half-minute trailer for the sequel to last summer’s surprise superhero smash:

1. Fame has gone to Tony Stark’s helmeted head: He’s cockier than ever, sassing off to a congressional panel that wants to commandeer his Iron Man suit for the American people and later making some kind of stage entrance (see left) amid pyrotechnics and stacked cheerleaders in Iron Man-themed body suits.

2. Stark has upgraded his armor, as evidenced by the triangular chest piece (see below; the original one was round).

3. Whiplash, the main villain in this one (played by an extra-greasy Mickey Rourke), wields a pair of electrified whips that can slash through a race car. Tony Stark’s race car. And we’re guessing that’s just for starters. 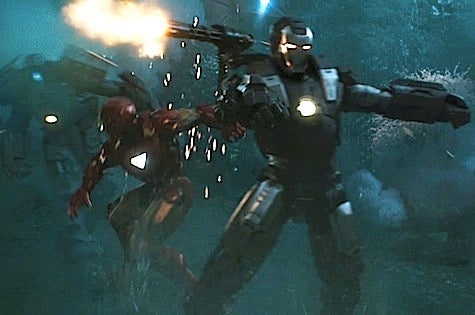 4. Someone has created a posse of attack robots that resemble Stark’s original suit design (the one he used to escape from the cave in "Iron Man"), and unleashed them on him and friend James Rhodes, the military man who dons Stark’s "B" suit known as War Machine (see right). And the two of them battle said robots together.

5. The assistant/boss sexual tension between Stark and Pepper Potts (Gwyneth Paltrow) seems to be coming along nicely; he asks for a kiss, and she delivers one — to the Iron Man helmet, which she is holding for him (below). Ha ha. Then she chucks it out of the cargo plane so he has to dive after it. Good thing he has a flying suit.